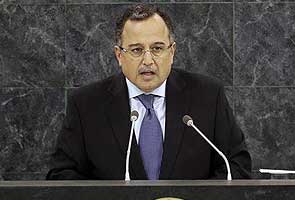 United Nations: Egypt's interim foreign minister has called for a nuclear-free Middle East in his address to world leaders at the United Nations.

Interim Foreign Minister Nabil Fahmy told the UN General Assembly in New York on Saturday that Egypt's latest political transition, including presidential and parliamentary elections, will end "by next spring."

Mr Fahmy is part of an interim government installed by the country's powerful military after the ouster of Islamist President Mohammed Morsi in July.

He is calling for all Mideast countries to declare their support for a region "free from weapons of mass destruction, as well as from nuclear, chemical and biological weapons."

Promoted
Listen to the latest songs, only on JioSaavn.com
Earlier this week, Fahmy told The Associated Press that Egypt's relations with the United States are "unsettled" as the country struggles to redefine its national interests.