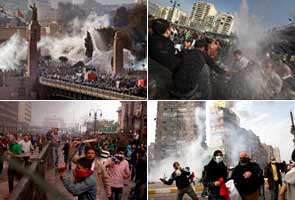 Washington: US President Barack Obama on Friday put Egypt's embattled leader, Hosni Mubarak, on notice that he should not use his soldiers and the police in a bloody crackdown on the protests in Egypt, edging away from a close American ally whose cities have erupted in protest.

Addressing the nation from the White House after a day of rage across Egypt, Mr. Obama said he called Mr. Mubarak and told him "to refrain from any violence against peaceful protesters" and to turn a "moment of volatility" into a "moment of promise." Declaring that the protesters have universal rights, he said, "The United States will continue to stand up for the rights of the Egyptian people."

Mr. Obama's brief remarks came as a blunt reply to Mr. Mubarak, who spoke to his own people just one hour before and mixed conciliation with defiance as he dismissed his government but vowed to stay in office to stabilize Egypt.

Faced with images of riot police officers using tear gas and water cannons against protesters, the Obama administration has moved from tentative support to distancing itself from Mr. Mubarak, its staunchest Arab ally, saying it would review $1.5 billion in American aid and warning him that he must confront the grievances of his people.

Mr. Obama noted that in Mr. Mubarak's speech, he promised to expand democracy and economic opportunity. "He has a responsibility to give meaning to those words," Mr. Obama said. He called on Mr. Mubarak to open a dialogue with the demonstrators, though he did not go as far as to urge free and fair elections.

Illustrating the delicate balance that the administration faces with Egypt, Mr. Obama referred to the joint projects of the two countries. He also urged the demonstrators to "express themselves peacefully."

But the firmness of the president's comments signalled that the crisis in Egypt had passed a "critical turning point," in the words of one senior American official. Regardless of whether Mr. Mubarak survives, this official said, the upheaval has already transformed Egyptian politics and how the United States will handle a leader long seen as a stable anchor in a turbulent region.

The announcement that the administration would review its aid was the first tangible sign that the United States was keeping Mr. Mubarak at arm's length. The White House spokesman, Robert Gibbs, declined to give details about the review, except to say that the American "assistance posture" would depend on events "now, and in the coming days."

Egypt is the fourth-largest recipient of American foreign aid, after Afghanistan, Pakistan and Israel, and just ahead of Iraq. It is a critical partner on issues like the Israel-Palestinian peace process and a bulwark against Islamic extremism in the Arab world. The administration has also relied on Egypt to give an Arab stamp of approval to Iraq's fledgling government.

The mushrooming protests confront the administration with one of the most nettlesome foreign policy dilemmas it has faced, forcing it to abandon the careful balance that Mr. Obama and his predecessors have struck between supporting the democratic aspirations of the Egyptian people while reaffirming ties with Mr. Mubarak. This same calculation has governed American dealings with other Arab allies led by entrenched autocratic rulers, notably Saudi Arabia and Jordan.

In each case, the overriding concern is that the same people who are clamouring for change could choose leaders who are hostile to the United States, or are even extremists.

Still, standing by Mr. Mubarak for fear of what could come after him could lead to "resentment towards the United States that could last another three decades, like Iran," said Martin S. Indyk, a Middle East peace negotiator in the Clinton administration. Laying out the American dilemma, Mr. Indyk said, "If we don't back Mubarak and the regime falls, and the Muslim Brotherhood takes control of Egypt and breaks the peace treaty with Israel, then it could have dramatic negative ramifications for American interests in the Middle East."

The administration also reacted sharply to the Egyptian government's extraordinary move to shut down the Internet, social networking Web sites, texting and other wireless communications. Mr. Obama called on the government to reverse the steps, which Secretary of State Hillary Rodham Clinton described as "unprecedented."

American officials tried to call the Egyptian Ministry of Communications for an explanation on Friday, but they were unable to reach anyone on a landline phone, said a senior administration official.

Also on Friday, the State Department issued a travel alert, warning American citizens to avoid going to Egypt, or if there, to stay in one place.

Officials from the Pentagon were consulting with their Egyptian military counterparts, Mr. Gibbs said. The role of the military, officials said, was most likely to be decisive in the coming days -- in particular, if the protests continue and the government orders soldiers to open fire on civilians.

Senior Egyptian military commanders cut short a visit to the Pentagon on Friday and were headed to Cairo as the Egyptian Army was deployed to put down protests in the country's streets, American military officials said.

The chief of staff of Egypt's armed forces, Lt. Gen. Sami Hafez Enan, was due to meet this Monday with Adm. Mike Mullen, the chairman of the Joint Chiefs of Staff, and remain with his delegation in Washington through next Wednesday. But as the protests intensified on Friday, he and his group headed for the airport.

On Thursday, Mr. Biden said he did not consider Mr. Mubarak a "dictator" and stopped short of calling him to step down. He said the Egyptian government should respond to demands that are "legitimate," drawing criticism from those who said he was calling their legitimacy into question.

On Friday evening, Mr. Obama avoided the question of whether Mr. Mubarak needed to go. "Ultimately," he said, "the future of Egypt will be decided by the Egyptian people."

Promoted
Listen to the latest songs, only on JioSaavn.com
Helene Cooper and Elisabeth Bumiller contributed reporting.