Moreno, who only came to office on May 24, issued a decree removing his running mate from all his functions as vice president, but stopped short of sacking him. 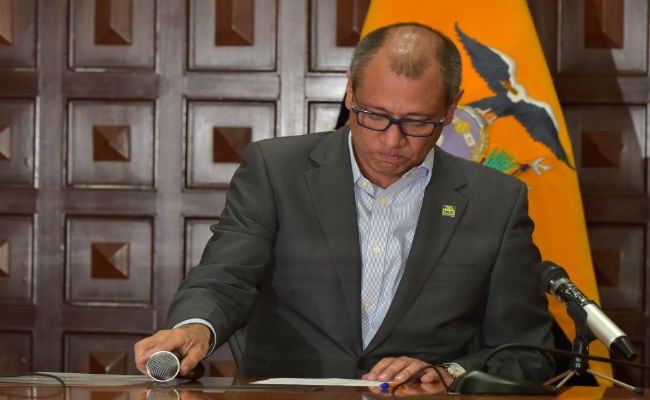 Quito: Ecuador's President Lenin Moreno on Thursday stripped his vice president, Jorge Glas, of all his functions after his deputy delivered a stinging critique of the new leftist leader.

Moreno, who only came to office on May 24, issued a decree removing his running mate from all his functions as vice president, but stopped short of sacking him.

Glas, who has served as vice-president since 2013, has been buffeted by a wave of corruption accusations from the opposition, including allegations of links to the scandal surrounding the Brazilian oil giant Odebrecht, which has sent shockwaves across the region.

The decree came a day after the vice president, who held the same position under Moreno's feisty predecessor Rafael Correa, published a long list of criticisms of the president, including charges that he had handed control of state media to "representatives of the private media" and had "a perverse way of dealing with economic data."

Ecuador's oil-rich economy has suffered from the global slump in crude prices and there have been strains inside the left-wing Country Alliance party that has held power for a decade on how to deal with the downturn while maintaining subsidies for the poor.

Moreno served as vice president to Correa from 2007-2013. The two men have increasingly been engaged in mutual reproaches over the poor state of the economy that Moreno inherited from Correa.

One of the functions Glas was removed from was his supervisory role in the multi-million dollar project to rebuild homes destroyed in a devastating 2016 earthquake that killed 600 people.

Under the Ecuadorian constitution, the vice president is mandated to fill in for the president should the head of the state be incapacitated or removed for any reason, and would enjoy the same powers as the president.

Since the vice president is elected by popular vote, he cannot be sacked by the president. The only way for him to lose his job would be through a trial in the national assembly, which has ruled out such a scenario.

Glas' criticism put him firmly in the camp of Correa in the split emerging within the Country Alliance party.

Correa, a vocal critic of his own successor, was the first to criticize Moreno's decree.

Promoted
Listen to the latest songs, only on JioSaavn.com
"Oops! "Dialogue" seems to have only been for those who hate the revolution! Forwards, Jorge! Take it as a badge of honor!" the former president said.

(This story has not been edited by NDTV staff and is auto-generated from a syndicated feed.)
Comments
Lenin MorenoJorge GlasEucador vice president