Eclipse in the backdrop of the pyramids 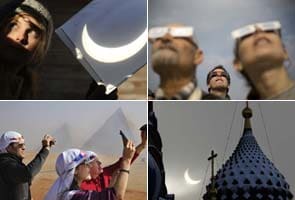 Cairo: People across the Middle East watched a partial solar eclipse on Tuesday that began there and later extended across much of Europe.

The eclipse was first seen over Jerusalem, where the sun appeared to have taken a large bit out of its upper right section.

A solar eclipse happens when the moon lines up between the sun and the Earth, casting a lunar shadow on the Earth's surface and obscuring the solar disk.

During a partial solar eclipse, only part of the sun is blotted out.

Muslims gathered for special prayers at mosques in the Gaza Strip, marking the partial solar eclipse.

For them and many other religious followers around the world, the eclipse was not just a scientific wonder, but also a divine occurrence.

In Egypt, tourists enjoyed a spectacular sight, having the Pyramids as the backdrop for their partial eclipse experience.

"To see this in the beautiful desert with the Pyramids as the backdrop, it's amazing, and I think it really made the day special," one tourist said.

Various stages of the eclipse were seen across Europe and a sunset eclipse will be visible from central Russia, Kazakhstan, Mongolia and northwest China.