Ebola Cases to Triple to 20,000 by November Unless Efforts Raised: WHO 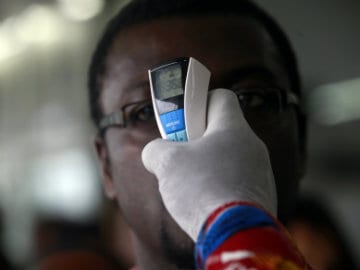 A man is checked for Ebola at Abidjan airport (Reuters)

Geneva: The number of Ebola infections will triple to 20,000 by November, soaring by the thousands every week if efforts are not significantly stepped up to stop the outbreak, the WHO warned Tuesday.

"Without drastic improvements in control measures, the numbers of cases of and deaths from Ebola are expected to continue increasing from hundreds to thousands per week in the coming months," the World Health Organization said in a study.

The current outbreak in West Africa has already claimed more than 2,800 lives and infected more than 5,800 people.

But the WHO study forecasts that if no significant action is taken, "the cumulative number of confirmed and probable cases by November 2 ... will be 5,925 in Guinea, 9,939 in Liberia and 5,063 in Sierra Leone".

The total for those three countries alone will therefore surpass 20,000 cases, said the study published in the New England Journal of Medicine on Tuesday.

That would also translate to a jump in the number of deaths as the experts suggest that the fatality in the current outbreak is much higher than the widely estimated one in two.

If only cases of deaths and recovery were taken into account, the fatality rate stands at about 71 percent, the study showed.

"We are seeing exponential growth and we need to act now," said Christopher Dye, co-author of the study jointly carried out with the Imperial College in London.

"If we don't stop the epidemic very soon, this is going to turn from a disaster into a catastrophe," he told reporters in Geneva, warning that the epidemic might simply "rumble on as it has for the last few months for the next few years."

"The fear is that Ebola will become more or less a permanent feature of the human population," warned Dye, who is the UN health agency's head of strategy.

It is one of the deadliest viruses known to man, and the current outbreak, which quietly began in southern Guinea last December, has by far killed more than all other Ebola outbreaks combined.

Prior to the current epidemic, the deadliest outbreak was the very first one on record, in Democratic Republic of Congo in 1976, when 280 people died.

What has changed is the increasing mobility of the population affected.

"These are large, highly mobile, well-interconnected populations," he said.

Cultural practices like washing and touching dead bodies have compounded the problem, leading to the widespread contagion of the virus -- which is transmitted by body fluids contact.

The very slow response in countries never before hit by the virus as well as by the international community had also allowed the virus to take hold, he said.

Promoted
Listen to the latest songs, only on JioSaavn.com
Christl Donnelly, a professor of statistical epidemiology at the Imperial College, who co-authored the study also pointed to the weak health systems in the three hardest-hit countries -- Liberia, Sierra Leone and Guinea.

"In Nigeria, for example, where health systems are stronger, the number of cases has so far been limited, despite the introduction of infection into the large cities of Lagos and Port Harcourt," she said.