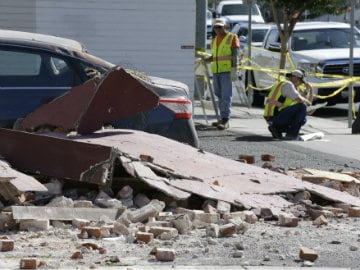 Vallejo, California: The historic blue-collar town of Vallejo is a short distance but a far cry from the touristy Napa Valley vineyards and quaint towns. So when Sunday's earthquake struck, the damage to the wine industry took center stage and the rubble in Vallejo got scant attention.

The bayside city that twice was briefly the capital of California sustained millions of dollars in damage and dozens of people were injured, with a couple hospitalized.

On Vallejo's Mare Island, the first US naval shipyard on the Pacific, numerous century-old buildings used today by more than 100 businesses and other enterprises suffered damage, mostly to their facades, officials said.

The quake - although it exacted a greater toll in damage and injuries in Napa Valley - was the latest blow to a hard-luck community that has weathered years of bankruptcy and is now beset by poverty, gangs and crime.

For City Manager Daniel Keen, the magnitude-6.0 quake posed the first major test for this city of about 100,000 people since it emerged from bankruptcy three years ago with budget, staff and public services pared back.

"This city has been through an awful lot," Keen said, including budget cuts that leave it operating at about 50 percent of normal city staffing. But, he said, "we'd never really worked together as a team" in an emergency before Sunday's quake.

Mostly, it seemed on Tuesday that Vallejo came through the challenge. Yellow-hatted building inspectors and structural engineers, including 20 from the state who showed up that morning to help, climbed the rolling city's hilltops to scan chimneys and rooftops for damage.

In the parking lot of Vallejo's First Baptist Church, 26-year-old Leslie Thomas and others lined up for a free lunch, as usual. But it was the Salvation Army, rather than the usual church workers, serving the coffee, pastries and boxed meals this time. The quake had knocked loose the brick bell tower of the church, forcing local officials to close it and the charity to take over responsibility for the soup kitchen.

"Wouldn't want a lot of people standing in there and then all of a sudden it just collapses," Thomas said.

Vallejo is less than 15 miles (24 kilometers) south of tony Napa, the wining, dining and tourism center hardest hit by Sunday's quake, but Vallejo is in some ways a world away.

While the wine country thrived, financial mismanagement and the collapse of the housing bubble meant Vallejo took one of the hardest dives of any city in the recent recession. Bankruptcies, mortgage defaults and joblessness soared.

The city's poverty rate stands at 16 percent, and personal income is two-thirds that of Napa residents.

Vallejo saw better times in the 19th century, twice serving briefly as an early capital of California. Much of the housing stock is brick Victorians, veterans of California's quakes.

Elizabeth Hoffman ticked off past quakes felt here: "1906, 1989, and now. I don't think they're going to survive another one." Hoffman, 34, was taking her elementary-school-age son around Tuesday to show him the damage from the latest temblor.

Her driveway was one of 30 sites the city deemed too dangerous to enter because of quake damage. The shaking, less severe overall than up north in Napa, had sent a neighbor's Victorian chimney down on her parked car.

Instead of seeking out an evacuation center, residents who were leery of their buildings after the quake found lodging with friends and family instead, Salvation Army Capt. Vickie Harvey said.

Promoted
Listen to the latest songs, only on JioSaavn.com
The final damage toll would likely be in the tens of millions of dollars, said Keen, the city manager.