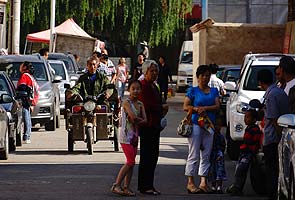 The quake hit near the city of Dingxi in Gansu province, a region of mountains, desert and pastureland. Residents described shaking windows and swinging lights but little major damage and little panic. Tremors were felt in the provincial capital of Lanzhou 177 kilometers (110 miles) north, and as far away as Xi'an, 400 kilometers (250 miles) to the east.

"You could see the chandeliers wobble and the windows vibrating and making noise, but there aren't any cracks in the walls. Shop assistants all poured out onto the streets when the shaking began," said a front desk clerk at the Wuyang Hotel in the Zhang County seat about 40 kilometers (25 miles) from the epicenter. The clerk surnamed Bao refrained from identifying herself further, as is common among ordinary Chinese.

With a population of 26 million, Gansu is one of China's more lightly populated provinces, although the New Jersey-sized area of Dingxi has a greater concentration of farms in rolling hills terraced with fields for crops and fruit trees. Dingxi has a total population of about 2.7 million.

The deaths and injuries were reported in Min County and other rural southern parts of the municipality, Dingxi Mayor Tang Xiaoming told state broadcaster CCTV. Tang said damage was worst in the counties of Zhang and Min, where scores of homes were damaged and telephone and electricity services knocked out.

Su Wei, leader of a 120-member rescue team from the paramilitary People's Armed Police, told state broadcaster CCTV that they were on their way to the epicenter, but progress was being slowed by mud and rock slides blocking the road.

The Chinese Red Cross said it was shipping 200 tents, 1,000 sets of household items, and 2,000 jackets to the area and sending teams from both Lanzhou and Beijing to help with relief work and assess further needs.

Heavy rain is expected in the area later in the week, raising the need for shelter and increasing the chance of further landslides.

The quake was shallow, which can be more destructive. The center said it struck about 20 kilometers (12.4 miles) beneath the surface, while the Gansu provincial earthquake administration said it was just 6 kilometers (3.7 miles) deep.

The U.S. Geological Survey measured the magnitude of the initial quake as 5.9 and the depth at 10 kilometers (6 miles).

Initial measurements of an earthquake can vary widely, especially if different monitoring equipment is used.

China's worst earthquake in recent years was a 7.9-magnitude temblor that struck the southwestern province of Sichuan in 2008, leaving 90,000 people dead or missing.
Comments
China earthquake

Foreign Investors Pull Out Over $16 Billion From India Amid Pandemic: Report