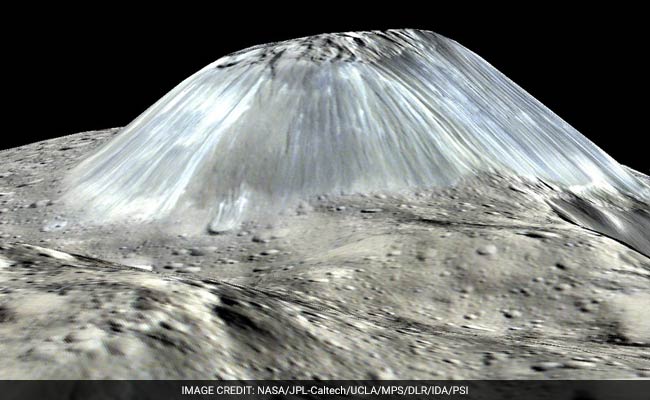 Lots of folks may still be salty over Pluto's "demotion" from planet to dwarf planet, but it's becoming apparent that the little worlds with this designation are anything but boring. In a set of six studies published Thursday in Science, researchers report that Ceres - a dwarf planet in the asteroid belt between Mars and Jupiter - plays host to many intriguing geological features, including a massive ice volcano.

Ceres is now being orbited by NASA's Dawn spacecraft. According to one of the new studies from the Dawn team, a 13,000-foot mountain dubbed Ahuna Mons may actually be a cryovolcano. The surface temperature on Ceres hovers around minus-40 degrees Fahrenheit. Under those conditions, water can freeze as hard as rock, forming sturdy mountains that can reach incredible heights.

But the researchers think Ahuna Mons is even cooler than a giant ice mountain - they think it's a giant ice volcano, and one that formed relatively recently to boot. They couldn't find any signs of tectonic activity that would have formed the mountains, so they think it must have erupted out of the planet's surface instead.

Just as a volcano made of solid rock will sometimes spew molten magma, cryovolcanoes sometimes spit out liquid water. Scientists believe Ahuna Mons was formed when some of this molten material pushed up against the surface, squeezing enough to create a raised dome but not quite enough to burst it. This is particularly exciting because Ceres doesn't contain the same planetary ingredients as other worlds found to host volcanoes - instead of being primarily rocky or icy, the body is made of a mix of salts, muddy rocks and water ice - which suggests that this kind of geologic activity might be more common in the solar system than previously assumed.

"There is nothing quite like Ahuna Mons in the solar system," Lucy McFadden of NASA Goddard, a co-author on the paper, said in a statement. "It's the first cryovolcano we've seen that was produced by a brine and clay mix. ... Ceres, which orbits between Mars and the gas giant Jupiter, is interesting because it appears to be a transition object - it's not completely rocky, but it's not an ice world either."

Ahuna Mons's age is exciting as well. The peak appears to be sharp, bright and free of pock-like craters. That suggests that it's young enough not to have eroded, darkened from radiation exposure or been bombarded by rocky impacts like some older parts of the planet's surface.

"We're confident that Ahuna Mons formed within the last billion years, and possibly within a few hundred million years," NASA's Ottaviano Ruesch said in a statement. "Ahuna Mons is telling us that Ceres still had enough heat to produce a relatively recent cryovolcano," which is surprising, because planets as small as Ceres quickly lose the heat produced during their formation. It's also too isolated to generate heat from friction from a gravitational tug-of-war with larger neighbors.

Promoted
Listen to the latest songs, only on JioSaavn.com
Dawn's mission has been extended, and the spacecraft will continue to study this strange little world. Scientists hope that as Ceres approaches its April 2018 perihelion - its closest pass of the sun - the increase in light and heat will trigger a burst of volcanic activity.
© 2016 The Washington Post