Haag told his co-passenger that he was "physically excited" because he was flying to see his old girlfriend. 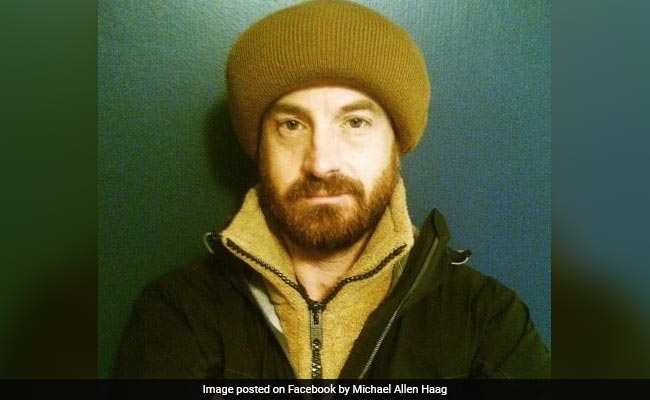 The man was very drunk, misbehaved with his co-fliers and then urinated in a magazine pouch

To paraphrase an old air travel axiom: What goes in must come out, one way or another.

There are approximately seven fluid ounces in a double vodka tonic - give or take, depending on how generous Frontier Airlines is with the pour.

Michael Allen Haag ordered his first one during the first cart service Thursday evening, according to the FBI - shortly after the plane took off from Denver, with hundreds of miles to go before it reached Charleston, South Carolina.

Haag was assigned to a middle seat, but this didn't seem to bother him, as his fellow passengers would later recall in their interviews with police.

Two women sat on either side of him. One, by the window, was already asleep with her head on the tray table. The other was awake in the aisle seat, and she wore a tank top that - she would later tell the FBI - Haag seemed very interested in.

Haag told the woman he was "physically excited" because he was flying to see his old girlfriend, an FBI agent wrote in a federal affidavit. As she recalled the conversation, he kept staring at her chest.

She put on headphones and tried to fall asleep, but Haag wouldn't stop asking her questions, she said.

What sort of men did she like? Oh, she was married? What sort of relationship did she have with her husband? What was her "deal," she said Haag asked her, when she made it clear she did not want to talk.

Haag's attention apparently shifted to the woman on his right. She recalled waking very suddenly, to discover that a 45-year-old man she did not know was touching her fingers.

"Stop touching me," she told Haag. He apologized, according to the affidavit - but then kept apologizing, over and over, as he cornered her against the window.

When Haag allegedly touched her leg, she started to yell.

About a dozen rows back, at the rear of the plane, a woman identified only as Emily had also been asleep. She more or less had the whole row to herself.

But now she woke suddenly, too, to the sound of an uproar in Row 25. The woman in the window seat next to Haag was standing straight up, the FBI agent wrote, calling for a flight attendant.

Then Emily watched with growing concern as a flight attendant marched Haag to the back of the plane and gave him his own private row - directly across the aisle from her.

The man was at least very drunk, Emily thought to herself, as Haag took his new seat and fumbled for his seat belt.

"He was out of his mind," Emily said. "Like he couldn't speak. He was mumbling."

In the FBI agents words, Haag was "clearly intoxicated and possibly high. But a flight attendant helped buckle him in, and for a while he seemed to go passive.

Sleep now behind her, Emily took out her phone, thinking she would take a furtive picture of the strange man to show her friends.

And then, the FBI wrote, Haag unbuckled himself.

Emily shared two pictures with the CBS affiliate in Denver. In the first, Haag is slouched in his chair, his hands apparently folded over his lap.

Her second photo, taken a few minutes later, looks no different - except for the thin, clear fountain arcing from between the man's hands, seeming to land inside the magazine pouch in front of his knees.

And he was indeed peeing, the FBI agent wrote -- emptying two double vodka tonics and who knows what else into the small gap between seats.

What goes in, must come out, but how it gets out makes all the difference.

The plane landed in Charleston shortly after 9 p.m., after more than three hours in the air. Emily said she and the two women in Row 25 gave statements to police, and she eventually got a $200 flight voucher from Frontier Airlines - which did not return a request for comment from The Washington Post.

Emily took one more photo of Haag, this time being led through the terminal in handcuffs.

Promoted
Listen to the latest songs, only on JioSaavn.com
He was released from jail the next day on a $25,000 bond, charged with interfering with a flight crew and two counts of indecent exposure - worth up to 20 years in a federal prison if convicted.