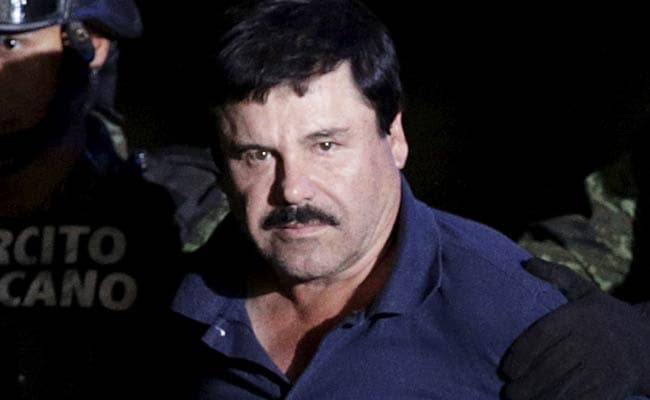 Recaptured drug lord Joaquin "El Chapo" Guzman is escorted by soldiers at the hangar belonging to the office of the Attorney General in Mexico City, Mexico on January 8, 2016. (Reuters)

Mexico City: Mexico is formally starting extradition proceedings against captured drug lord Joaquin 'El Chapo' Guzman, the government said late on Sunday, in the strongest sign yet it intends to send him to the United States.

Guzman, the infamous boss of the Sinaloa drug cartel and the world's most prominent drug trafficker, was arrested in northwestern Mexico on Friday after a months-long manhunt.

On Sunday, Interpol served two extradition warrants, the Mexican attorney general's office said, kick-starting the latest attempt to have Guzman face US justice for the hundreds of tonnes of cocaine, methamphetamine and heroin he has exported across the border.

Mexico regularly extradites leading traffickers but the government of President Enrique Pena Nieto resisted handing over Guzman after his February 2014 arrest as a point of national pride.

That position changed after he escaped from a maximum security prison in July - for the second time in his career - by slipping away through a mile-long tunnel that surfaced in his cell.

Guzman has been taken back to the same facility over the weekend but, to avoid a repeat of that humiliation, Mexico's government says it aims to hand Guzman over to US justice as soon as possible. His lawyers are trying to block extradition.

The US government wants Guzman, who is believed to be 58 years old, tried on charges ranging from money laundering to drug trafficking, kidnapping and murder.

Guzman, who is blamed for thousands of deaths in Mexico and the United States from addiction and gang warfare, is facing open federal indictments in seven US jurisdictions.

Chicago and Brooklyn, New York are leading contenders to host what would be one of the most high profile US criminal trials in years, former US law enforcement officials said.

Chicago, which in 2013 dubbed Guzman its first Public Enemy No 1 since Al Capone, has a sweeping 2009 indictment against him, including several counts of conspiring to smuggle and distribute drugs, as well as money laundering charges.

"It will be a fight between each jurisdiction but logic would say that Chicago is the way to go," said former US Drug Enforcement Administration agent Robert Mazur, who spent five years undercover infiltrating the criminal hierarchy of Colombia's drug cartels and is now president of a Florida private investigations agency.

Mexico could extradite Guzman by mid-year, sources familiar with the situation said. However, the timing will likely depend on any injunctions filed by Guzman's lawyers, meaning that a US trial could still be a year or more away.

Mexican government sources say security forces were helped in their efforts to recapture Guzman when he met with Hollywood star Sean Penn late last year. They said they were aware of the planned meeting so kept track of Penn, allowing them to locate Guzman.

Neither Penn nor Mexican actress Kate Del Castillo, who set up the meeting, have commented since their interview with Guzman was published in Rolling Stone magazine on Saturday.
© Thomson Reuters 2016