Dozens of bodies recovered after violence in Central African Republic 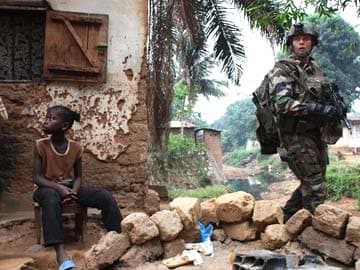 A French soldier patrols in a neighbourhood during a daytime patrol as shooting continued in Bangui on December 26, 2013.

Georgios Georgantas, head of the International Committee of the Red Cross's delegation, said the bodies were probably only a fraction of those killed in Bangui as his teams had been unable to access certain parts of the city.

Thousands of French and African peacekeepers have been unable to contain a flare-up in violence in the last week. The mostly Muslim Seleka rebels who seized power in March and Christian self-defence militias have carried out tit-for-tat attacks on each other and more recently on the local population.

"Violence has been at extremely high levels," Georgantas told Reuters by telephone. "We have information about more bodies in certain parts of town which we have been unable to access because the fighting was so intense."

He said the Miskine and Boy-Rabe districts on either side of the main road heading north from Bangui remained inaccessible.

A representative of medical charity Medecins Sans Frontieres at Bangui's main hospital said it had received more than 50 people with gunshot or machete wounds since Wednesday night from the fighting which raged for hours across Bangui.

A spokesman for the African Union peacekeeping mission (MISCA) said Chadian peacekeepers were attacked by gunmen in the Gabongo neighbourhood near the airport on Wednesday.

"The number of Chadian soldiers killed has risen to six because one of them died from his wounds this morning," Elio Yao told Reuters. He could not immediately provide a total for the number of African peacekeepers killed during the crisis.

Two French troops were killed this month, just days after Paris deployed a 1,600-strong peacekeeping mission in its former colony in early December under a U.N. mandate to protect civilians.

The violence eased on Thursday as French peacekeepers took up positions on main roads near the airport and in troubled neighbourhoods, although sporadic shooting was reported in several areas during the morning.

Many in the country say the bloodshed has little to do with religion, in a nation where Muslims and Christians have long lived in peace. Instead they blame a political battle for control over resources in one of Africa's weakest-governed states.

The Christian militia, known as 'anti-balaka' which means anti-machete in the local Sango language, accuse Chadian forces of supporting the Seleka rebels. Chad strongly denies this.

MISCA's commanding officer, Cameroon's Martin Tumenta Chomu, said on Tuesday the Chadian troops would be moved outside the capital to northern Central African Republic. The MISCA force is scheduled to reach 6,000 soldiers by the end of January from nearly 4,000 at present.

He said France, which was protecting the airport and neighbourhoods where its own citizens lived, was now also focusing on returning peace to flashpoints in the city, such as the Gabongo and Bacongo neighbourhoods.

France's force, code-named Sangaris, has between 1,000 and 1,200 men stationed in Bangui, with the rest deployed in the interior of the country, he said.

Promoted
Listen to the latest songs, only on JioSaavn.com
"The Sangaris force has not been the target of coordinated attacks. We are the target of sporadic shooting which we respond to each time," he said.