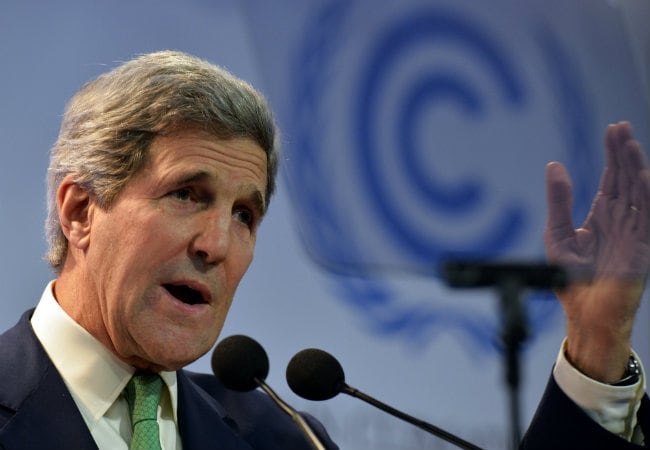 US Secretary of State John Kerry delivers a speech in Lima on December 11, 2014. (AFP Photo)

Lima, Peru: The United States urged developing countries Thursday to ease objections to a world deal on climate change as deadlines loomed at a 12-day UN meeting in Lima.

The talks, meant to pave the way to a landmark pact in Paris next year, are scheduled to conclude on Friday, but delegates reported deadlock and a souring mood as the final day neared.

In a speech touching on one of the thorniest issues, US Secretary of State John Kerry called on developing nations to understand they too had to curb carbon emissions even if they felt it was unfair.

"I know the discussions can be tense and decisions are difficult and I know how angry some people are about the predicament they've been put in by big nations that have benefited from industrialization for a long period of time," Kerry said.

But, "we have to remember that today more than half of global emissions -- more than half -- are coming from developing nations. So it is imperative that they act too."

If the negotiations fail, "future generations will judge our effort not just as a policy failure but as a massive collective moral failure of historic consequence," he warned.

The envisioned pact would bring all the world's nations into a single forum for cutting heat-trapping greenhouse gases blamed for damaging Earth's climate systems.

To be sealed in December 2015 and enter into force by 2020, it must ensure global warming does not exceed two degrees Celsius (3.6 degrees Fahrenheit) over pre-industrial levels.

The Lima round began on December 1 on a hopeful note, following promises by China, the United States and the European Union -- the world's three biggest carbon polluters -- to tackle their emissions.

Money, too, began to flow into the Green Climate Fund, the main vehicle for channeling at least $100 billion (80 billion euros) in annual aid, promised by rich countries to climate-vulnerable nations by 2020.

But on Thursday the negotiations ground on with few signs of genuine horse-trading.

"We have been talking over the last two decades," said Ban. "We don't have a moment to lose."

One is a draft blueprint for guiding negotiations up to the December 2015 finale -- a document which has ballooned as countries filed more objections and suggestions.

"We have seen the laggards throwing in language of all kinds into the negotiating document," Tony de Brum, foreign minister of the Marshall Islands, told journalists.

The other is a format for standardizing information by which countries will make carbon-cutting pledges at the heart of the 2015 accord.

The sparring touched on a years-old source of friction -- how to apportion responsibility between rich and developing nations for ramping up carbon action.

Known as differentiation, it is rooted in a division of responsibilities enshrined in the United Nations Framework Convention on Climate Change at its birth 22 years ago.

At the time, UN members were split into advanced economies, the first to burn fossil fuels to power their prosperity, and developing countries, which -- until then -- bore little blame for carbon pollution.

Europe, the United States and other advanced economies accept that some form of differentiation remains valid today.

Voracious burners of coal, developing countries now account for more than half of global emissions, a share set to rise, they argue.

The UNFCCC's meetings are notorious for textual battles and delay, in some cases prolonging closure by more than a day.

Scientists are pounding an ever-louder drumbeat of warning.

Earth is on track, they say, for warming this century of about four degrees Celsius, cursing future generations with species loss, rising seas, drought, floods and disease spread.

The head of the UN's panel of climate scientists, Rajendra Pachauri, warned Thursday that only about a thousand billion tonnes of carbon dioxide (CO2) can still be emitted before the targeted two degree limit is breached.

"We are all on spaceship Earth. We are now sharing this space of a thousand gigatons of CO2," he said.

Promoted
Listen to the latest songs, only on JioSaavn.com
"We have to divide up this space equitably and in a matter of fair and ethical considerations because otherwise we are going to exceed the two degrees."