The elder Sharif has been living in London but functioning as the supreme leader of Pakistan Muslim League-Nawaz (PML-N) and the party looks up to him for guidance in key political matters. 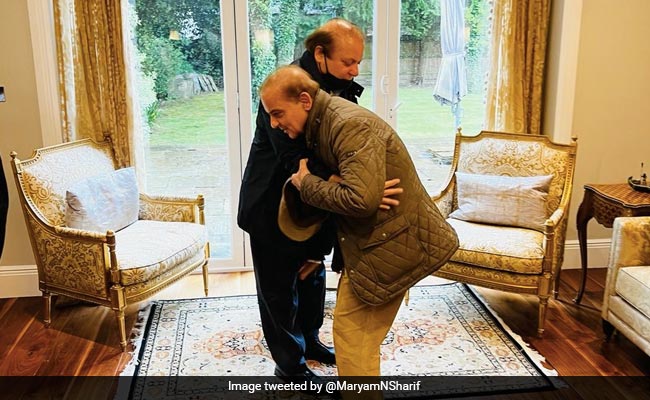 Nawaz Sharif asked Shehbaz Sharif to focus all his attention on serving the people. (File)

Pakistan's former premier Nawaz Sharif has directed his younger brother and Prime Minister Shehbaz Sharif not to engage in any talks with former premier Imran Khan, who is currently leading a long march to Islamabad demanding snap general elections.

The elder Sharif has been living in London but functioning as the supreme leader of Pakistan Muslim League-Nawaz (PML-N) and the party looks up to him for guidance in key political matters.

In a series of tweets late on Monday, Nawaz Sharif said that Khan frequently claimed to bring a million people to Islamabad but has not yet managed to gather 2,000 people and was desperately looking for a face-saving gesture from the government.

"I have told Shahbaz Sharif that whether he [Imran] brings 2,000 or 20,000 people, neither he [the prime minister] should listen to any demand of this fitna [mischief] nor give him any face-saving, for which he is desperate," the PML-N chief tweeted.

He asked Prime Minister Shehbaz to instead focus all his attention on serving the people of the cash-strapped economy.

He also said that the reason for the indifference of the people towards the long march was that Khan's evil lies had been exposed before the nation.

"He [Imran] told one lie after another so brazenly and stubbornly that the DG ISI [Inter-Services Intelligence] was forced to break his silence and tell the nation the truth, which he could not answer even after so many days," he said.

"That is why," Nawaz maintained, adding: "Imran's all emphasis as usual is on foul language." The tweets came after various reports of backdoor talks between the government and Khan's Pakistan Tehreek-e-Insaf over the holding of elections before time started doing rounds.

The reports got credence after Shehbaz Sharif on Saturday set up a 13-member committee, including representatives from the ruling coalition parties regarding the march, saying that anyone wishing to talk could approach the committee.

Khan was earlier this month disqualified from membership of the current National Assembly by a five-member panel of the Election Commission of Pakistan (ECP).

The 70-year-old PTI leader has been demanding early elections. The current term of the National Assembly will end in August 2023 and fresh elections should be held within 60 days.