Donors Raise $102,000 For Gay Boy Who Could Not Afford College

Owen had left his parent's house in February after they gave him an ultimatum to attend their church, after years of disagreements related to his sexuality 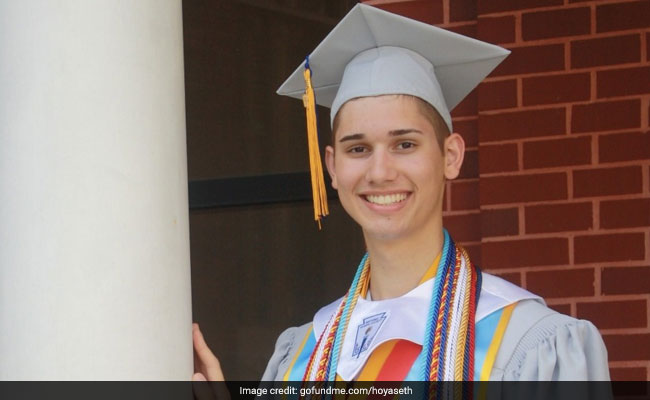 Seth Owen's teacher had set up a GoFundMe account to raise money for his college.

On paper, everything was going well for Seth Owen. A valedictorian of a high school in Jacksonville, Florida, with a 4.16 grade-point average, the 18-year-old had been accepted to Georgetown University as part of its Class of 2022.

But he had left his parent's house in February after they had given him an ultimatum to attend their church, after years of disagreements related to his sexuality - Owen is gay - or move out, he told NBC News. And Georgetown's financial aid package for him had been calculated based on what his family was expected to contribute, leaving him with a $20,000 gap to pay the tuition for his first year.

"I started to cry, because I realized there was no way that I could go to college," Owen told NBC News. "Georgetown was my only option, because I had already denied my other acceptances."
The school would not change his financial aid package, NBC News reported.

"While we cannot comment on any individual case, we work closely with students whose financial circumstances change after admission to modify financial aid assistance and ensure they can still enroll regardless of their ability to pay," a school official told NBC.

Luckily, a former teacher stepped in. Jane Martin, who teaches biology, set up a GoFundMe account to raise the money for Owen's first year's tuition.

"Seth was just a kid that really stood out to me," Martin told NBC News. "He was super ambitious and was always trying to go above and beyond to make sure he could be as successful as possible."

A month later, the account has wildly exceeded its goal, raising more than $100,000.

The two plan to use the donations for scholarships for other students in situations like Owen if Georgetown adjusts the financial aid package.

Owen spoke to NBC about his upbringing. He said that his parents, who are Southern Baptist, discovered that he was gay as a sophomore when his father found a photograph of him with another guy that indicated that he was gay. His parents questioned him around that time one night until 4:30 a.m.

They then sent him to a Christian counselor, he said.

"It was not like a conversion camp, but it was definitely awkward conversion therapy where they tried encouraging stereotypical masculine tasks and things like that," Owen said.

The disagreements started coming to a head his final year of high school.

"I started bringing up my disagreements with the church that they attend. I mean, there was just incident after incident," Owen said. "They talked very negatively about the LGBTQ-plus community. They said that gay people would not serve in the church. Then they were talking about transgender people as though they weren't human, and that really, really bothered me."

His parents would not let him attend a church of his choosing, he said. His father, Randy Owen, told First Coast News that the family did not force Seth out.

"As far as kicking him out because he wouldn't attend the church we attend - that's a lie," he told the ABC affiliate. "I made clear we are not kicking him out, but we worship as a family. He's allowed to live here as long as he worships the same way we worship."

Seth Owen told NBC that he hopes to send a message to others like him.

"I remember growing up and saying I had really strict religious parents, and people would brush it off," he said. "If someone were to say that to me today, I would sit down, and I would ask them, 'What's going on? What's going on at home? What's happening? What kind of messages are being preached in your church?' "

(Except for the headline, this story has not been edited by NDTV staff and is published from a syndicated feed.)
Comments
LGBT communityDonation for college feesSeth Owen