"I Look Orange, It's The Lightbulb": Trump's Dig At Energy-Saving Policy 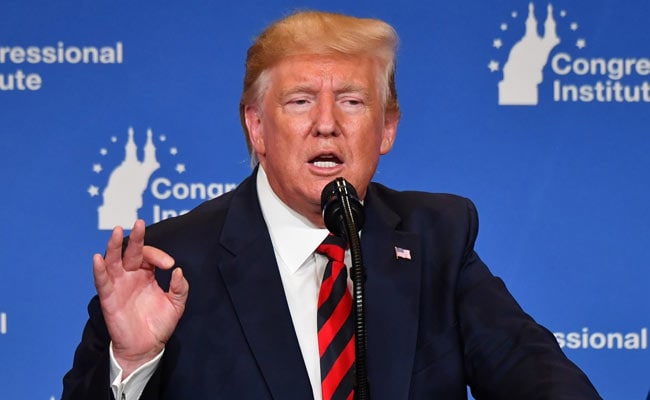 While the Democratic presidential debate was underway on Thursday, President Donald Trump was behind a pulpit of his own, addressing House Republicans at a policy retreat in Baltimore. In between bashing the Democratic candidates in Houston and running through a list of what he considered GOP triumphs, Trump said that energy-saving lightbulbs - which his administration has tried to block - make him look orange.

His exact remarks, delivered during a nearly 70-minute opening address:

"The lightbulb. People said what's with the lightbulb? I said here's the story. And I looked at it, the bulb that we're being forced to use, number one to me, most importantly, the light's no good. I always look orange. And so do you. The light is the worst."

The comment drew laughs from the audience, though it was not immediately clear whether the president meant it in jest or in earnest. The White House did not immediately respond to requests for comment.

Trump's characteristic golden hue has spawned a range of derisive nicknames, from the oft-used "President Cheeto" to Dana Carvey's more obscure "Tangerine Tornado" on "Saturday Night Live." The president has reportedly complained that his complexion appears too yellow on screen, though, according to professional photographers and makeup artists, energy-saving lightbulbs are probably not to blame.

It is true that bulbs have different light temperatures, but the effect this has on someone's complexion is typically not very significant, said Jocelyn Augustino, a D.C.-based freelance photographer.

"When you go into a family's house, just because there are tungsten lights, I don't think you look around the room and think everyone looks orange," she said.

In situations where the president is being photographed or filmed, professional photographers will know to adjust the white balance so that it is accurate to what is being seen in person, she added. "It's video or photo 101."

Tamzin Smith, a portrait photographer in Rockville, Maryland, pointed out that Trump's orange complexion is visible even when he is photographed against white backgrounds. If bulbs were responsible for casting a warm glow, anything white in a photo of the president - including the background, a white shirt, or even his teeth - should also be orange.

"You can see that even when his teeth are white, his skin is orangey-red," Smith said. "It's definitely not the lighting."

The president's skin tone, said makeup artist Jason Kelly, is more likely the result of artificial tanning and an over application of bronzer, a type of powder or cream designed to give a tanned look.

Kelly, 45, was the official makeup artist for the Republican National Convention held in Cleveland in 2016. When then-candidate Trump came into the makeup room, he already had his hair and makeup done, Kelly said, and was sporting a thick layer of bronzer. Kelly applied a layer of loose powder on Trump, but according to the makeup artist, Trump "came in, and he said he thinks he already looks pretty good."

According to the New York Times, aides close to the president have reported similar experiences: Trump tends to prefer to do his makeup in private.

Kelly said it is generally recognized among makeup artists that Trump's application of bronzer is atypical. "When I see him, I see a line of oxidized bronzer around his hairline," Kelly said. "The application is like a kindergartner did it.

"Bronzer shouldn't be applied from forehead to chin. It's meant to contour the face," he continued. "Putting it all over is just going to make you go orange."

Augustino, who has photographed the president in person, said Trump "always looks somewhat tan." His warm skin tone, she added, may also be brought out by his golden-brown hair.

"Whatever color you have around the face is going to give you a little cast," she said.

Whether the president uses an artificial tanner is a much-debated mystery. Kelly has said that he does, but according to sources who spoke to the Times, no tanning bed or booth exists anywhere in the White House. Some facilities owned by Trump, such as the Trump National Golf Club in Charlotte, North Carolina, offer spray-tanning services.

On previous occasions, the president's distinctive complexion has been framed by his aides as a sign of health. In a Times article that ran in the deep of winter this year, a senior administration official said that Trump's orange skin tone was the result of "good genes."