Donald Trump Vs. G6: The Best Of The Barbs

While many of the barbs have been directed at Donald Trump, the US president has given as good as he got. 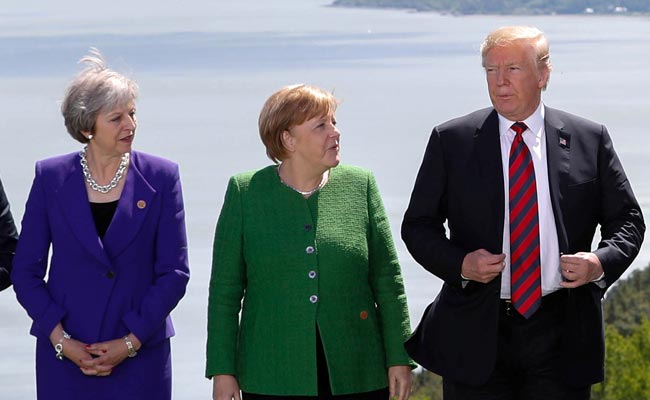 Donald Trump announced on Twitter that he was pulling the US endorsement of G7 summit's final statement.

La Malbaie. Canada: G7 leaders, who can usually at least pretend to be the best of friends, wrapped up a two-day summit in Canada on Sunday that was marked by startlingly outspoken criticism.

While many of the barbs have been directed at Donald Trump, the US president has given as good as he got. Here are some of the most memorable exchanges:

"Canadians are polite and reasonable but we will also not be pushed around" -- host Prime Minister Justin Trudeau tells a post-summit press conference of his plans to impose his own tariffs on US imports in retaliation to similar measures by Trump.

"PM Justin Trudeau of Canada acted so meek and mild during our @G7 meetings only to give a news conference after I left saying that, 'US Tariffs were kind of insulting' and he 'will not be pushed around.' Very dishonest & weak -- Trump announces on Twitter that he is pulling the US endorsement of the summit's final statement.

"The European Union is brutal to the United States ... They know it. When I'm telling them, they're smiling at me. You know, it's like the gig is up" -- Trump lashes Europe over what he sees as their unfair trading practices.

"If the expectation was that a weekend in beautiful Charlevoix surrounded by lovely people was going to transform the president's outlook on trade and the world, then we didn't quite perhaps meet that bar" -- Trudeau acknowledges the deep divide between the US and fellow G7 members in an end of summit press conference.

"The rules-based international order is being challenged, quite surprisingly, not by the usual suspects but by its main architect and guarantor, the US" -- European Council president Donald Tusk vents his frustration at Trump.

Return Of The Bear?

"Let's remember why the G8 became the G7. And before discussions could begin on any of this, we would have to ensure Russia is amending its ways and taking a different route" -- Trump's proposal receives short shrift from Britain's Theresa May who has accused Russia of being behind the recent poisoning of a former spy.

(Except for the headline, this story has not been edited by NDTV staff and is published from a syndicated feed.)
Comments
Donald TrumpG7 SummitJustin Trudeau