In July 2017, President Donald Trump draped the Medal of Honor around the neck of Vietnam war veteran James McCloughan. On Wednesday, he posted a photo of that moment with McCloughan's image replaced by that of the hero dog. 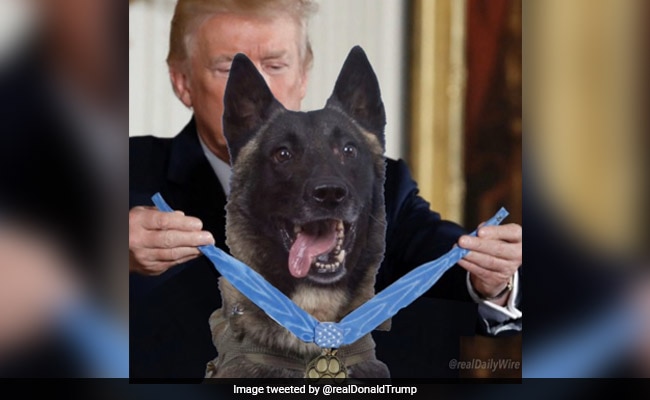 The distinctive star of the medal was replaced with a paw print.

In a somber White House ceremony in July 2017, President Donald Trump draped the Medal of Honor around the neck of James McCloughan, who was credited with saving the lives of 10 men in a brutal, days-long battle in Vietnam. Trump told the former Army medic that "we are in awe of your actions and your bravery."

On Wednesday, Trump posted a photo of that moment with McCloughan's image replaced by that of a dog.

"AMERICAN HERO!" Trump tweeted, with the photo of the dog he said ran down ISIS leader Abu Bakr al-Baghdadi in a Syrian tunnel before Baghdadi killed himself.

The distinctive star of the medal was replaced with a paw print.

Trump and the Pentagon declined to release the dog's name, but the canine has become a social media sensation after Trump tweeted a photo Monday. Since then, the dog has been the feature of countless memes.

It also collided with a real-world moment after the conservative site Daily Wire tweeted the image Tuesday with McCloughan removed.

A watermark for the site appears in Trump's tweet, but it is a cropped version that removes the attribution of the source photo, which is The Associated Press. That would have indicated that it began as a legitimate news photo, raising the question of whether Trump or a staffer knew McCloughan had been edited out.

Jeremy Boreing, the chief operating officer at The Daily Wire, dismissed emailed questions about whether the altered photo originated from his publication.

McCloughan saw the photo as an attempt to herald the dog's actions in combat, he told The New York Times.

"This recognizes the dog is part of that team of brave people," he said. McCloughan said he worked with military dogs in Vietnam, where they helped scouts detect enemy positions.

McCloughan was 23 in May 1969 when his unit was caught in a fierce firefight in Tam Ky. He was raked by shrapnel from a rocket-propelled grenade while assessing other soldiers for their injuries, but despite his wounds, McCloughan repeatedly braved enemy fire to carry the injured to safety.

A fellow medic was killed the next day, he later recounted.

"I got him, got his body, and now I'm the only medic," McCloughan said in 2017. "So I downed my pack near a tree and got all of my pressure bandages out of there and put them in all of the pockets that I had. . . . And now I start going to get men."

He was the first to receive the Medal of Honor from Trump.

The altered photo was tweeted by Trump about three hours before he awarded the Medal of Honor to Army Master Sgt. Matthew Williams for bravery in Afghanistan.

Trump basked in the reverence of the award to begin the ceremony.