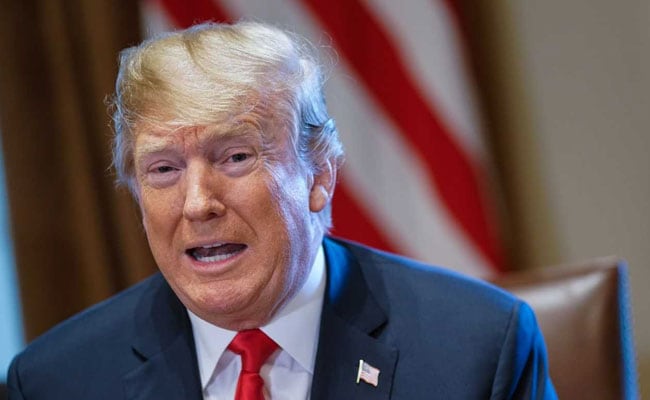 "We want to keep families together," Donald Trump said

President Donald Trump will sign an executive order to keep immigrant families together, reversing his insistence that only Congress could end his policy of separating children from parents who are caught illegally crossing the U.S. border with Mexico.

Trump announced his decision Wednesday during a meeting at the White House with lawmakers as global condemnation of the family separation policy intensified and the backlash in Congress grew. He didn't immediately elaborate on the order.

"We want to keep families together," Trump said, "At the same time we have to be strong on the border." He added that otherwise "the country is going to be over-run by millions of people."

His declaration marks a turnabout after the president and top administration officials spent days arguing that the policy was rooted in law and that it was up to Congress to pass legislation to change it. Trump also demanded that such legislation include funding for a border wall and curbs on legal immigration.

Trump backed down as House Republicans hit a stalemate on the broader immigration legislation and the Senate was still in negotiations on a narrowly focused bill to keep families together.

The furor over the family separations and the chaotic White House response are engulfing Republicans less than five months before November elections that will determine whether the GOP remains in control of Congress.

The issue has drowned the GOP's preferred campaign message about a booming economy on the week of the six-month anniversary of the Trump tax cuts and brought harrowing footage of wailing toddlers to American living rooms.

Trump's own wife was among those urging him to reverse course. First lady Melania Trump encouraged Trump to act on his own if Congress wasn't able to, a White House official said. Trump's daughter, Ivanka, also spoke with the president several times to express her concerns, said another person familiar with the matter.

Polls show the public is overwhelmingly opposed to separating children from their parents, though a majority of Republicans support the approach. Perhaps more important, 70 percent of women disapprove, according to a Quinnipiac University poll taken June 14-17, with female suburban voters considered crucial in deciding control of Congress this fall.

The uproar prompted rare displays of defiance to Trump from some congressional Republicans. Ohio Rep. Steve Stivers, head of House GOP campaign arm, was among those who called on Trump to end the policy.

"I don't even know how it plays in the midterms, I just know that it's something that as a dad my heart goes out to these families," Stivers said. "There's lots of ways to do it and I'm not picky but I'd like to see us try to preserve families while we also uphold the law."

Rep. Peter King of New York said the administration's zero-tolerance policy is a self-inflicted wound for his party. "We control the place," the New York Republican said of Washington. "I mean I understand the logic of it. But in practicality it's unfair."

The White House doubled down on its insistence on congressional action on Monday with Trump and Homeland Secretary Kirstjen Nielsen ardently arguing that border security enforcement agents had no alternative to breaking up migrant families under the law. Neither Democrat Barack Obama nor Republican George W. Bush pursued a policy of separating children from their parents for illegal border crossings.

While Attorney General Jeff Sessions has been a prime advocate of the separation policy -- arguing that it serves as a deterrent to illegal immigration -- the Justice Department he leads is preparing the fine points of an executive order to meet the president's new stance, according to a person familiar with negotiations over the issue.

Both Sessions and Nielsen were at the Capitol Wednesday to meet with House Republicans. Republican Rep. Joe Barton of Texas said Sessions didn't explain Trump's sudden change on the policy.

The House was set to vote on two immigration bills on Thursday, a version favored by conservatives and a compromise measure worked out between GOP leaders and more moderate Republican lawmakers. Both, to varying degrees, would have fulfilled Trump's priorities on immigration, but neither has enough support to get even a majority of Republicans on board.

Moderate Republicans facing reelection in swing districts won't vote for the conservative version of the legislation. The compromise they worked out doesn't have enough support to pass either, according to several Republican lawmakers. Democrats were excluded from the negotiations and oppose major portions of both bills.

That is despite Trump telling lawmakers Tuesday night that he would sign either bill.

Almost the whole Freedom Caucus, three dozen of the most conservative Republicans, told the GOP vote-counting team last night that they oppose the compromise bill.

Even Will Hurd, a more moderate Republican from Texas, said he doesn't know if he'll vote for the compromise bill. He said he's concerned about over-use of the "a 4th century technology" like a border wall and the decrease in legal immigration while companies are scrambling to find workers in a tight labor market.

Promoted
Listen to the latest songs, only on JioSaavn.com
House Majority Whip Steve Scalise gave the White House a list of lawmakers he believes Trump will personally need to work with to get them to support the immigration legislation, according to a GOP aide with knowledge of the meeting, who declined to share names on that list. About two dozen House members went to the White House for a meeting on the bill.