US Lawmakers To Vote On Bill To End Migrant Family Separations

In a session with Republican lawmakers on Tuesday, Donald Trump promised to support whatever legislation they passed. 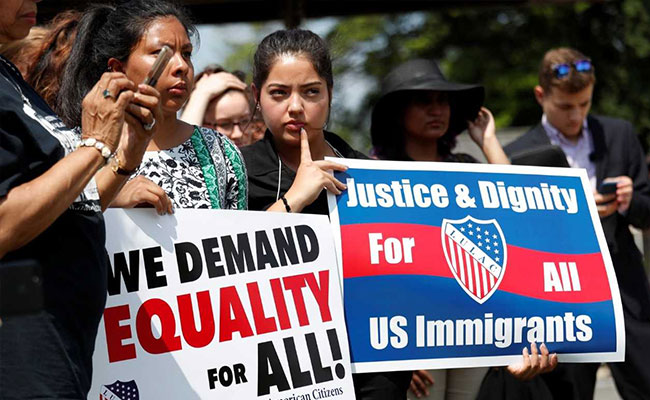 US House Speaker said that the proposed vote shall take place on Thursday. (Reuters)

Washington: US lawmakers will vote Thursday on a bill that would end the controversial practice of separating migrant children from parents caught entering the country without papers, House Speaker Paul Ryan said Wednesday.

Heart-rending scenes and sounds of crying children taken from their families has aroused a firestorm of opposition to President Donald Trump's crackdown on illegal immigration.

"We do not want children taken away from their parents. We can enforce our immigration laws without breaking families apart. The administration says it wants Congress to act and we are," Ryan said.

"Tomorrow the House will vote on legislation to keep families together," said Ryan, the top Republican in the US Congress.

Ryan said the proposed legislation also resolves "in a very elegant way" the status of the so-called "Dreamers," undocumented immigrants brought to the United States illegally as children.

No details were immediately provided on that aspect of the bill.

In a session with Republican lawmakers on Tuesday, Trump promised to support whatever legislation they passed.

Ryan said that under the bill to be voted on Thursday, parents prosecuted for entering the country illegally would no longer be separated from their children, and instead families would remain together in the custody of the Department of Homeland Security (DHS) for the length of the legal proceedings against them.

Promoted
Listen to the latest songs, only on JioSaavn.com
"Additional funding is also going to be made available so that DHS has sufficient resources to house and care for families during this entire process," he said.

"The bottom line is this -- we are going to take action to keep families together while we enforce our immigration laws."