Unlike the Clemson Tigers, the Bison won't hang around for a fast-food lunch. Instead, they'll dine at the Capitol. 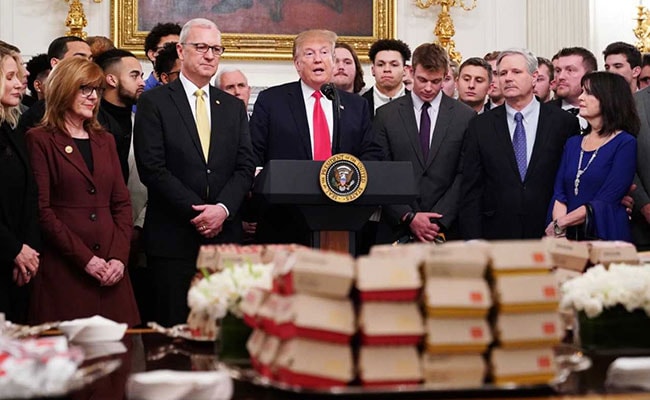 The North Dakota State Bison in the State Dining Room of the White House in Washington. (AFP)

The White House, as it did after Clemson won the College Football Playoff national championship game, offered up a fast-food feast to the celebrating players, this time with food from Chick-fil-A and McDonald's.

Trump told the North Dakota State players that he could have had the White House chef prepare food for them, but instead opted for a thematic repeat of the menu he offered Clemson during the partial government shutdown.

"I know you people," Trump said to laughter, noting the Clemson precedent and adding, "We like American companies."

Trump, according to a pool report, introduced the players by the "Bison" team nickname and joked that they told him, "Sir, make sure you say it with a Z." He paused briefly for a serious comment, mentioning the devastating tornadoes that struck Alabama and saying that he was "sending our love and prayers to the incredible people of Alabama."

North Dakota State quarterback Easton Stick joined his former teammates after participating in the NFL scouting combine in Indianapolis. Trump saw something he liked in the NFL prospect, saying that Stick has "the look, too" and comparing him to New England Patriots quarterback Tom Brady.

"Somebody better draft him," he said of Stick. "He's going to be a rich guy."

The Bison, who had been scheduled to eat lunch during a Monday afternoon visit to the Capitol, were expected to bring a full contingent of players during their Washington visit.

"We addressed [politics]," Coach Matt Entz told the Grand Forks Herald. "This isn't a political trip, this is a Bison trip and, personally, I sold it as two things: It's one more opportunity for the 2018 team to be together, but also in my mind the start of the 2019 season and the things we're going to do together."

Entz was named the team's coach in December, moving up from defensive coordinator when Chris Klieman was named head coach at Kansas State. The team was invited to Washington by North Dakota Sen. John Hoeven (R). Klieman did not make the trip.

"We sold it as a once-in-a-lifetime opportunity that we're taking," Entz said before the trip. "I want to make this as great of an experience of being part of Bison football as possible."

"For me, personally, the No. 1 thing is just the team being together," Entz said. "It's probably watching our players as they experience something that some of them probably have never been a part of before. It's seeing [running back] Ty Brooks walk into the White House and just knowing that in 10 years from now he's going to be able to tell his family, his friends, that, yeah, I went to the White House with my football team."

North Dakota State won the championship in the FCS; the FBS is the highest level of play for the largest schools, with the FCS next.

(Except for the headline, this story has not been edited by NDTV staff and is published from a syndicated feed.)
Comments
Donald TrumpNorth Dakota State Football Team