As Feud Heats Up, Trump Says Joe Biden Was Subject Of Ukraine Call

A whistleblower's complaint sparked off accusations that Donald Trump had sought to persuade President Volodymyr Zelensky to investigate a son of Joe Biden raising concerns of dangerous foreign meddling in the US election similar to the interference blamed on Russia in 2016. 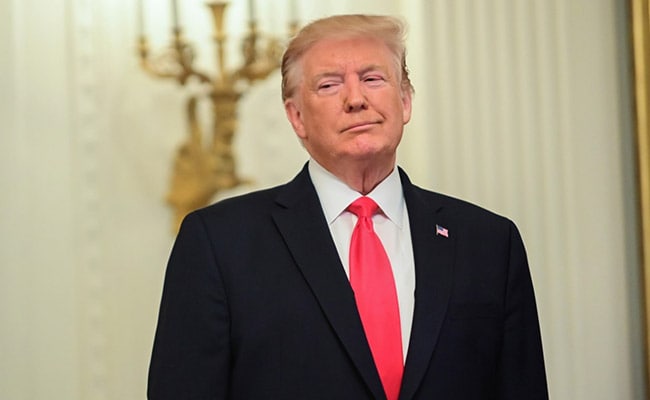 US President Donald Trump confirmed Sunday that he discussed former vice president Joe Biden and corruption allegations in a phone call with Ukraine's leader, adding to calls by Trump's opponents for his impeachment.

A whistleblower's complaint sparked off accusations that Trump had sought to persuade President Volodymyr Zelensky to investigate a son of Biden, Trump's possible 2020 election challenger -- raising concerns of dangerous foreign meddling in the US election similar to the interference blamed on Russia in 2016.

Trump said that the conversation, held in July, addressed alleged corruption involving Biden and his son Hunter, and he floated the possibility that a transcript could be released.

"We had a very great conversation, very straight, very honest conversation. I hope they can put it out," Trump said, repeating that he had done nothing wrong in the latest scandal to shake his presidency.

"The conversation I had was largely congratulatory, was largely corruption... and largely the fact that we don't want our people, like vice president Biden and his son, creating... the corruption already in the Ukraine."

Trump reportedly pressed Zelensky about eight times on the call to investigate possible corruption involving Hunter Biden, who worked with a Ukrainian natural gas company while his father was vice president.

Biden told reporters on Saturday that Trump's actions appeared "to be an overwhelming abuse of power."

"I know what I'm up against, a serial abuser. That's what this guy is," Biden said.

The Democratic Party has been split on whether to push for impeachment proceedings against Trump since he came to power in 2017.

But influential congressman Adam Schiff, chairman of the House Intelligence Committee, on Sunday said that his own reservations about impeachment were fading over Trump's Ukraine call.

"I have been very reluctant to go down the path of impeachment (but) the president is pushing us down this road.

"This seems different in kind, and we may very well have crossed the Rubicon here."

The Ukraine scandal mushroomed last week when Schiff revealed the acting Director of National Intelligence, Joseph Maguire, had refused to hand over the whistleblower complaint to Congress -- the latest administration rebuff to Congressional oversight efforts.

Maguire is scheduled to publicly testify before Schiff's committee on Thursday.

Nancy Pelosi, the top Democrat in Congress, said Sunday that if Trump's administration continued to block the complaint being released "they will be entering a grave new chapter of lawlessness which will take us into a whole new stage of investigation."

The phone call, reportedly on July 25, came the day after former special counsel Robert Mueller testified before Congress about his report that catalogued extensive contacts between the Trump 2016 campaign and Russians, including attempts to cooperate or collude -- neither of which is a specific crime.

It also laid out in detail 10 instances when Trump allegedly tried to obstruct the investigation, which Trump dismissed as a "big hoax".

Trump's senior staff swung behind him on Sunday. Treasury Secretary Steven Mnuchin told CNN that "I don't have any reason to believe that the president pressured" President Zelensky.

"People know there were issues that Biden's son did business in Ukraine. I, for one, have concerns about that," Mnuchin said.

Secretary of State Mike Pompeo told ABC that "if vice president Biden behaved inappropriately, if he was protecting his son and intervened in a way that was corrupt, I think we need to get to the bottom of it."

But Republican Senator Mitt Romney, a regular critic of Trump, said that any evidence of Trump asking Ukraine's president to investigate Biden "would be troubling in the extreme."

Trump and Zelensky will meet for the first time Wednesday at the UN General Assembly in New York.