Donald Trump Says His Talk with Putin "None Of Your Business"

Donald Trump has been dogged throughout his presidency by allegations of suspicious ties to Russia. 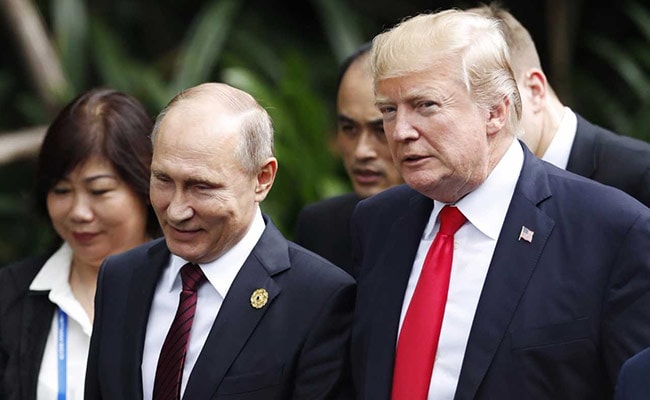 "I'll have a very good conversation with him," Trump told reporters at the White House.

President Donald Trump on Wednesday said he will be meeting with Russian President Vladimir Putin at the G20 summit in Japan but told journalists that the contents of the talks are "none of your business."

The keenly awaited meeting is overshadowed by a probe into Trump's relations with Russia and controversy that erupted the last time he held talks with the Kremlin leader in Finland in 2018.

"I'll have a very good conversation with him," Trump told reporters at the White House. "What I say to him is none of your business."

Trump has been dogged throughout his presidency by allegations of suspicious ties to Russia.

A major probe led by special prosecutor Robert Mueller found there was an organized Russian campaign to influence the 2016 election won by Trump. It found contacts between Russian operatives and Trump's election campaign, but no evidence of a joint plot.

It also detailed Trump's interest in a big potential real estate deal in Moscow well into his election year of 2016.

Trump has characterized Mueller's findings as a complete exoneration. However, he remains under fire from opponents for what they say is his consistently opaque relationship with Putin.

In Helsinki last year, Trump refused at a joint press conference with Putin to criticize Russian interference in the 2016 election and said that he believed the Russian leader's denials.

After an earlier meeting in Germany, Trump ordered the interpreter to hand over his notes and he has refused to say what the conversation with Putin was about.