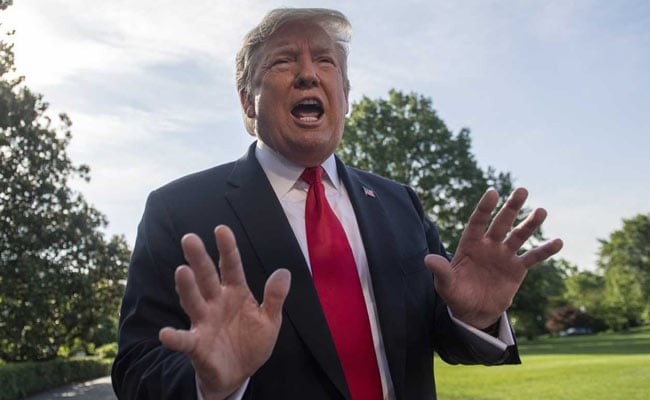 Donald Trump News: It was not immediately clear why he decided to pull back the operation. (File)

US President Donald Trump ordered an attack on Iran on Thursday in retaliation for the downing of a surveillance drone in the Strait of Hormuz, officials said, but he called the operation off just hours before it was due to occur.

Administration officials, who spoke on the condition of anonymity to discuss sensitive national security decisions, said the president approved the strikes after Iran's Islamic Revolutionary Guard Corps (IRGC) earlier in the day shot down a Navy RQ-4 drone operating off Iran's southern coast, a move Trump described as a "very big mistake."

But he later changed his mind, the officials said. It was not immediately clear why Trump decided to pull back the operation or what it would have included. The decision was first reported by The New York Times.

The aborted operation capped a day in which news of the drone's targeting heaped fuel on already heightened fears that the United States and Iran are on a course toward a military conflict as each side blamed the other for the incident.

Tehran and Washington gave conflicting accounts of what occurred when the massive drone crashed into the sea. While Iran said it had entered its airspace, the US military denied that assertion, characterizing the incident as an "unprovoked attack" over one of the world's most important commercial waterways.

In remarks alongside visiting Canadian Prime Minister Justin Trudeau at the White House, Trump condemned the shoot-down but also appeared to tamp down speculation that a counterstrike might be in the works, saying the drone may have been shot down without the knowledge of Iranian leaders.

Trump was noncommittal about a US counterattack. "Let's see what happens," he said. "This is a new fly in the ointment - what happened, shooting down the drone - and this country will not stand for it."

"We had a good briefing," McConnell said, adding that he could confirm that an unmanned aerial vehicle "was fired on from Iranian soil and it was in international waters. And beyond that I think the administration is engaged in what I would call measured responses."

Schumer said he cautioned that "these conflicts have a way of escalating."

"The president may not intend to go to war here, but we're worried that he and the administration may bumble into a war," he said. "One of the best ways to avoid bumbling into war, a war that nobody wants, is to have a robust open debate and for Congress to have a real say. We learned that lesson in the run-up to Iraq" in 2003.

After the White House meeting, Pelosi held a closed-door session with Democratic lawmakers to brief them on the developments. "We know that the high-tension wires are up there, and we must do everything we can not to escalate the situation, but also to make sure that our personnel in the region are safe," she said.

Thursday's strike capped a number of recent incidents, including attacks on oil tankers, that American officials have depicted as part of an Iranian effort to hurt the United States and its allies in the region. The attack on the drone comes as the United States continues its "maximum pressure" campaign against a country the Trump administration has identified as its main adversary in the Middle East.

Tehran has responded with defiance to the initiative, which was launched after Trump withdrew the United States from the 2015 Iran nuclear deal and has included designating the IRGC as a terrorist group and taking steps to cut off Iranian oil sales.

On Thursday, the European Union said officials from Germany, Britain, France, Russia, China and Iran would meet next week to discuss strategies to salvage the nuclear pact despite renewed US sanctions and Tehran's threat to exceed limits on its uranium stockpiles.

The Revolutionary Guard's top commander, Major General Hossein Salami, called the downing of the drone "a clear message to America."

"Our borders are Iran's red line, and we will react strongly against any aggression," Salami said in remarks carried by Iranian state television. "Iran is not seeking war with any country, but we are fully prepared to defend Iran."

Nearly a quarter of the world's oil passes through the Strait of Hormuz, which connects Middle East energy producers to markets around the globe.

Lt General Joseph Guastella, head of US air forces in the Middle East, told reporters at the Pentagon that the Global Hawk was flying at high altitude in the vicinity of recent tanker attacks and was not at any time closer than 21 miles to the nearest point on Iran's coast.

Guastella said the aircraft did not leave international airspace and was brought down by an IRGC surface-to-air missile fired from an area close to Goruk, Iran. "This dangerous and escalatory attack was irresponsible and occurred in the vicinity of established air corridors between Dubai, UAE, and Muscat, Oman, possibly endangering innocent civilians," he said. Guastella did not take questions, and the Pentagon did not make anyone else available to discuss the tensions.

Late Thursday, the Federal Aviation Administration issued an emergency order prohibiting US operators from flying in an overwater area of Tehran-controlled airspace over the Strait of Hormuz and Gulf of Oman due to heightened tensions, Reuters news agency reported.

The Global Hawk incident occurs the week after two tankers, a Japanese and a Norwegian, were attacked in the area of the Gulf of Oman. The Trump administration has blamed Iran for both incidents, at least one of which is said to have been carried out by use of a limpet mine similar to devices previously displayed at Iranian military parades. Iran has denied involvement, calling the accusation "a lie."

The tanker incidents were similar to an attack on a tanker off the United Arab Emirates in May. The US military also accused Iran of firing a modified SA-7 surface-to-air missile at an MQ-9 Reaper drone over the Gulf of Oman as it surveilled the attack on the Japanese ship.

Also this month, Centcom said Houthi rebels shot down an MQ-9 over Yemen using an SA-6 surface-to-air missile in an attack that "was enabled by Iranian assistance."

The latest incident occurs just days before acting Defense Secretary Patrick Shanahan steps down. Shanahan, who this week withdrew from his confirmation process after news media including The Washington Post published reports about past family strife, is handing responsibility for the military to Mark Esper, who now serves as army secretary.

Esper, who will also fill the post of defense chief in an acting capacity, does not have experience leading policy decisions at the Cabinet level. Both men attended discussions on Iran at the White House on Thursday.

It is unclear how the turnover at the top of the Pentagon will affect an internal debate about how to respond to what officials say is an attempt to strike American interests. Some defense officials have voiced concerns that officials led by national security adviser John Bolton, who has publicly advocated for regime change in Iran in the past, may be creating conditions in which war is inevitable.

At the same time, the Pentagon remains concerned about the potential for Iranian attacks on U.S. military personnel, especially those stationed in Iraq. During a visit to Baghdad last month, Secretary of State Mike Pompeo sought to relay a message for Iranian leaders that even one American death would result in a U.S. counterattack.

Sen. Lindsey Graham, R-SC, tweeted that he realized that the president is facing "difficult decisions" concerning Iran but that "when it comes to the Middle East, people rightly talk about the 'Cost of Action' but they seldom mention the 'Cost of Inaction.' "

But Trump appeared to tamp down the likelihood of an immediate military response as he highlighted the fact that the Global Hawk was unmanned. "We had nobody in the drone," he said. "It would have made a big difference, let me tell you."

A US official, speaking on the condition of anonymity, said US naval assets were trying to recover pieces of the drone.

The strike on the RQ-4 is much more significant than the recent attacks on Reapers. Each Global Hawk, which has a wingspan of 131 feet, is worth more than $100 million, is packed with sensors and is able to fly at altitudes of more than 55,000 feet to observe broad areas for periods that can stretch longer than a day.

The Global Hawk downed on Thursday was an older "demonstrator" model, according to another US official, that had been transferred from the Air Force to the Navy to carry out a mission known as Broad Area Maritime Surveillance. The Pentagon has since begun testing a newer cousin, the MQ-4C Triton. Neither version carries weapons.

According to an IRGC statement, the US drone took off from a base in the "southern Persian Gulf" and was heading toward Iran's Chabahar port "in full secrecy, violating the rules of international aviation."

"While returning to the western Hormuz Strait's region, the drone violated Iran's airspace and engaged in information-gathering and spying," the statement said.

At its narrowest, the Strait of Hormuz is 21 nautical miles wide, and ships passing through it must enter the territorial waters of Iran and Oman. Under the rule of the shah in 1959, Iran extended its territorial waters to 12 nautical miles and declared that it would recognize only "innocent passage" through the area, essentially excluding warships engaging in activities deemed hostile. Oman also claimed a 12-mile territorial limit in 1972 and later demanded that foreign warships obtain permission to pass through its waters.

The United States does not recognize any restrictions on transit through the strait.