Donald Trump's invitation issued on Twitter caught observers by surprise. If Kim accepts, it would be the third meeting between the leaders of the two wartime enemies amid efforts to contain North Korea's nuclear ambitions. 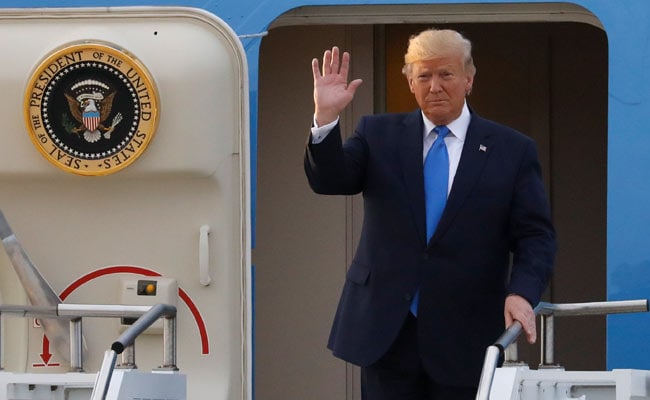 US President Donald Trump on Saturday invited North Korean leader Kim Jong Un to meet for a historic handshake at the demilitarised zone that divides the Korean peninsula, and said he would have "no problem" stepping over the border.

The invitation issued on Twitter caught observers by surprise. If Kim accepts, it would be the third meeting between the leaders of the two wartime enemies amid efforts to contain North Korea's nuclear ambitions.

The North's official KCNA news agency quoted Vice Foreign Minister Choe Son Hui as saying the offer was "a very interesting suggestion" but that no official request had been received.

Trump lobbed the shock invitation on Twitter from the G20 summit in Osaka, saying: "if Chairman Kim of North Korea sees this, I would meet him at the Border/DMZ just to shake his hand and say Hello(?)!"

After some very important meetings, including my meeting with President Xi of China, I will be leaving Japan for South Korea (with President Moon). While there, if Chairman Kim of North Korea sees this, I would meet him at the Border/DMZ just to shake his hand and say Hello(?)!

He later said he would have "no problem" stepping into the North with Kim -- in what would be a dramatic gesture re-enacting an extraordinary 2018 scene when the young leader invited South Korean President Moon Jae-in to walk over the Military Demarcation Line that forms the border between the Koreas.

"Sure I would, I would. I'd feel very comfortable doing that. I'd have no problem," Trump told reporters.

The US leader said the invitation was spontaneous, but it comes amid a recent flurry of diplomacy over North Korea's nuclear programme after a Trump-Kim summit in Hanoi collapsed without an agreement.

Speculation grew that something was afoot when US Secretary of State Mike Pompeo skipped a G20 dinner Friday without giving a reason.

"We'll see. If he is there, we will see each other for two minutes," said Trump, adding: "I just put out a feeler because I don't know where he is right now, he may not be in North Korea."

"We seem to get along... That's a good thing, not a bad thing," added the president.

North Korea's Choe said if a meeting took place it would be "another meaningful occasion in further deepening the personal relations between the two leaders and advancing the bilateral relations".

The North's speedy response to Trump's offer, and from such a senior figure, was seen by analysts as an indication that Kim would agree to the meeting as soon as Washington followed up with an official proposal.

"If he (Kim) isn't interested he would not release such a statement to begin with."

Twitter is not available to ordinary North Korean citizens, who have no access to the global internet, but Trump told reporters that Kim "follows" his account and they had received a "quick" response after his offer.

But there was scepticism that a fleeting frontier photo opportunity, no matter how symbolic, would bridge the two sides' differences over denuclearisation.

"For talks to have real legs, either Kim must credibly commit to denuclearisation or Trump must credibly agree to allow Kim to keep some of his nuclear weapons," said Scott Seaman, director of Eurasia Group Asia.

"Without a shared end goal, creating a viable roadmap to reaching it will remain impossible."

After several months of public silence, an exchange of letters between the leaders appears to have thawed the deep-freeze and raised hopes for a third summit after a historic first tete-a-tete in Singapore on June 12, 2018 and the second in Hanoi in February.

Trump arrived in Seoul from the summit in Osaka, where on Saturday he held a highly anticipated meeting with Chinese President Xi Jinping that produced a truce in trade tensions between the world's top two economies.

Last week, Xi visited Pyongyang for a highly symbolic summit with Kim. Analysts say that diplomatic breakthroughs often follow on from such meetings.

The Trump-Kim Hanoi summit foundered amid disagreements on what the North would be willing to give up in exchange for relief from sanctions that weigh on its economy.

The two sides blamed each other for the breakdown but Washington has said they are prepared to meet the North Koreans at any time without preconditions to keep diplomacy alive.

According to South Korea's unification minister, Kim and Trump have exchanged a total of 12 letters since the beginning of last year, with Kim the more assiduous suitor in their nuclear bromance, penning eight of those