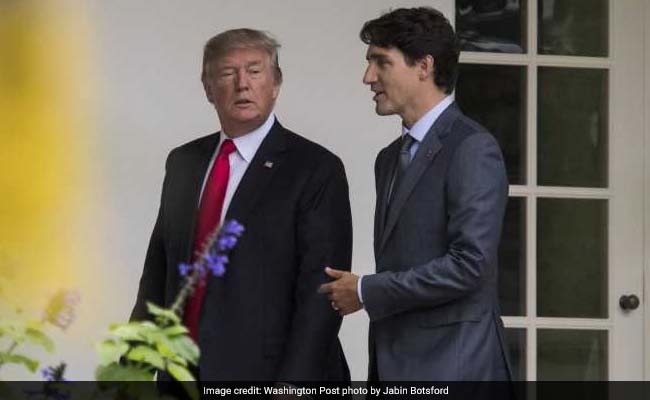 Donald Trump and Canadian PM Justin Trudeau are seen here at the White House in October 2017.

President Donald Trump campaigned on going hard after China for ripping off the United States on trade. Yet a year and a half into his presidency, Trump has put more tariffs on longtime U.S. allies than he has on China, his supposed "bad guy" on trade. The Trump administration announced new tariffs Thursday on the European Union, Canada and Mexico.

Almost all of the reaction has been negative. Many are calling it a political and economic mistake.

America's allies are stunned, stocks slid on Wall Street as trade-war fears returned, and economists are warning that Americans will soon face higher prices on a wide variety of products. A slew of Republican lawmakers immediately trashed the move as bad for the economy and foreign relations.

Trump's latest move takes the focus off China. Most countries (and U.S. lawmakers) agree with Trump that China isn't playing fair on trade, but instead of turning the EU and Canada into allies in the trade fight against China, Trump is alienating them.

The president has threatened tariffs on an additional $50 billion in Chinese goods later this month, but he has often changed his mind, putting tariffs on hold or scaling them back before they go into effect. Right now, Canada and the EU are taking a bigger blow. (The EU and other allies would also bear the brunt of Trump's proposed tariffs on autos).

Of course, it could all change quickly with a Trump tweet or remark.

"The president has the authority unilaterally . . . to do anything he wishes at any point subsequent to today. There is potential flexibility going forward," Commerce Secretary Wilbur Ross said Thursday on a call with reporters.

"We don't buy steel and aluminum from China. We buy it from our allies," said economist Chad Bown, a senior fellow at the Peterson Institute for International Economics.

Take a look at total U.S. steel and aluminum imports last year from various countries to understand who's affected most (data compiled by PIIE):

--Here's what it means for Americans: Higher prices. It's uncertain, at this point, how much prices will go up, but any increase in the cost of metals will likely cause prices of beer cans, cars and many other items to increase, possibly as early as late summer.

"We don't go out and buy steel beams, but we buy things that have steel in them. The things we buy will be more expensive," Bown said.

The Trump administration began putting tariffs on steel and aluminum imports in March, but Trump temporarily exempted a ton of countries (including Canada, Mexico and those in the EU). In March, the tariffs covered only about a third of metal imports. That hurt, but it was more like a pinprick.

Trump's latest move is more like a slap. It's likely to sting more, because about 80 percent of imports are covered by the tariffs now. Prices of metals will almost certainly rise in the United States. The price of hot-rolled coil steel, for example, is already up nearly 40 percent this year.

--Why is Trump doing this? Trump argues these tariffs are necessary for "national security," both to have enough metal to build tanks and airplanes and for economic security. He says we need to do this to save the American steel and aluminum industries and their good-paying jobs. He singled out China for dumping cheap steel on the global market for years, driving prices so low that some American factories couldn't survive.

Most agree China is a major cause of the problems, but the issue is: The United States doesn't buy much steel from China. These tariffs aren't doing much to hurt China. Instead, U.S. allies are taking the punch, even though there's little evidence they are buying Chinese steel and then shipping it here (trans-shipment).

The Trump administration argues that the only way to curtail China's metal industry is to force American allies to agree to tariffs or quotas that limit how much steel they send to the United States. Their goal is to reduce demand for Chinese metals all over the world.

"China's direct exports to us are quite small, but their impact on the overall market is quite large," Ross said Thursday. "That was the fundamental reason why this [tariff] had to be very wide ranging."

Opponents of the tariffs say that the national security claim is bogus and that Trump would be far better off persuading allies to join him in dealing with China than imposing tariffs on them.

"To do tariffs in the name of national security is absurd," said Matthew Rooney, managing director of the Bush Institute, who worked for many years at the State Department. "It's dangerous. It opens the door to other trading partners using national security as a justification to break their free-trade agreements."

--What impact will this have on the U.S. economy? This move is unlikely to tank the U.S. (or global) economy. The tariffs affect billions of dollars of steel and aluminum, but that is relatively small in the context of the $19 trillion American economy. Ross called the impact "trivial." But the real issue is what comes next.

Oxford Economics (among others) noted that these tariffs increase the chance of a full-blown trade war. Already, Mexico and the EU have fired back at Trump, announcing they will put tariffs (a.k.a. taxes) on some American goods sent to their countries. If Trump responds with more tariffs, the situation could escalate rapidly.

The overall impact on the U.S. economy might be small, but some Americans could be hurt a lot. The EU and Mexico plan to target many of their retaliatory tariffs on U.S. farmers, for example.

The tariffs could also be a blow to Trump's tax cuts. Middle-class households are saving about $900 this year on taxes, but the tariffs are likely to cause people to pay more for stuff at the store (or car dealership). If Americans end up paying $500 more for a car, that eats into the benefit of the tax cut significantly. Similarly, business executives might get nervous about what's going on with trade and start to pull back on investing in new factories and equipment.

The move is also likely to make it harder for Trump to get a new NAFTA deal with Canada and Mexico or trade concessions from the EU. These countries are angry and don't want to be seen as caving to Trump's tough moves.

"This represents another signal that prospects for a near-term NAFTA deal are fading," Alec Phillips, chief U.S. political economist at Goldman Sachs, said in a note to clients.

(This story has not been edited by NDTV staff and is auto-generated from a syndicated feed.)
Comments
Donald TrumpUS Trade agreements