Michael Cohen had planned to testify in the House in the wake of his three-year jail sentence on December 12 on charges of fraud, illegal campaign contributions, and lying to Congress in previous testimony. 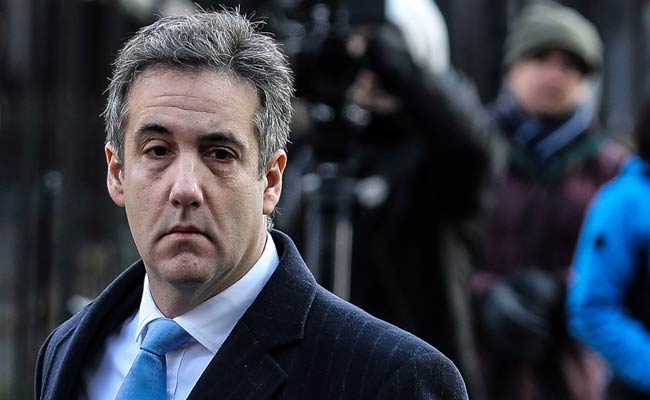 The threat allegation appeared to relate to repeated attacks by Trump. (Reuters)

Donald Trump's former lawyer Michael Cohen alleged Wednesday that he had been "threatened" by the president and postponed planned testimony in Congress.

Cohen's attorney Lanny Davis said in an explosive statement that both Trump and Trump's current personal counsel Rudy Giuliani had menaced Cohen and his family, forcing him to put off his February 7 appearance before the House Oversight Committee, where he was expected to talk about his work for the president.

"Due to ongoing threats against his family from President Trump and Mr. Giuliani, as recently as this weekend, as well as Mr. Cohen's continued cooperation with ongoing investigations, by advice of counsel, Mr. Cohen's appearance will be postponed to a later date," Davis said.

"This is a time where Mr. Cohen had to put his family and their safety first," he added.

The threat allegation appeared to relate to repeated attacks by Trump and Giuliani against Cohen that made vague references to Cohen's father-in-law, Fima Shusterman.

"Efforts to intimidate witnesses, scare their family members, or prevent them from testifying before Congress are textbook mob tactics that we condemn in the strongest terms," they said in a statement.

Cohen had planned to testify in the House in the wake of his three-year jail sentence on December 12 on charges of fraud, illegal campaign contributions, and lying to Congress in previous testimony.

He also admitted lying to Congress over pursuing a Moscow real estate deal in Trump's name during the election, even after Trump secured the Republican nomination.

Those subjects were expected to come up in his testimony, as well as an unproven, bombshell report last week saying that Cohen has told Special Counsel Robert Mueller, who is investigating possible Russia collusion, that Trump had directed him to lie to Congress.

Trump has denied that, and Mueller's office released a rare statement saying the BuzzFeed report was "not accurate."

Since Cohen told prosecutors as part of a plea deal that he lied to protect the president, Trump has lashed out at him twice on Twitter, making references to his wife Laura and her father Shusterman, who has taxi cab businesses in New York and Chicago, which also involve Cohen.

"He makes up stories to get a GREAT & ALREADY reduced deal for himself, and get his wife and father-in-law (who has the money?) off Scott Free. He lied for this outcome and should, in my opinion, serve a full and complete sentence," Trump tweeted on December 3.

He hit out again on in a January 18 tweet that cited in its first half a Fox News commentator, Kevin Corke.

"'Don't forget, Michael Cohen has already been convicted of perjury and fraud, and as recently as this week, the Wall Street Journal has suggested that he may have stolen tens of thousands of dollars....' Lying to reduce his jail time! Watch father-in-law!" Trump wrote.

On Sunday Giuliani said on CNN that Trump was not trying to intimidate Cohen but added: "Of course... if the father-in-law is a criminal in the Southern District of New York.... He may have ties to something called organized crime."

In their statement, Cummings and Schiff said they still expect Cohen to testify.

"We understand that Mr. Cohen's wife and other family members fear for their safety after these attacks," they said.

"Nevertheless, when our committees began discussions with Mr. Cohen's attorney, not appearing before Congress was never an option."

(Except for the headline, this story has not been edited by NDTV staff and is published from a syndicated feed.)
Comments
Michael Cohentestimony