A trio of Trump's most vocal GOP critics in Congress over his efforts to undermine the election results assailed the president. 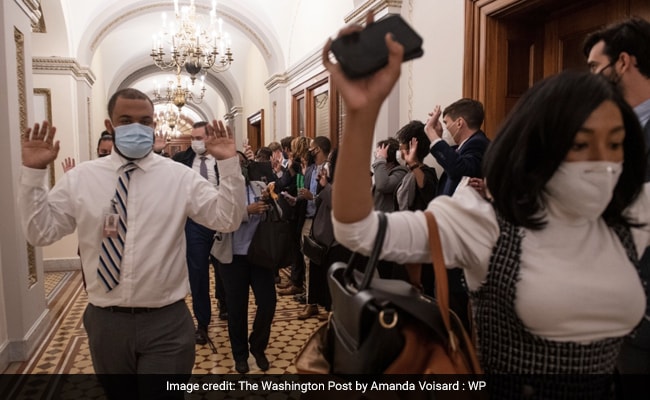 Democrats, tweeting from safe spaces within the Capitol, reacted passionately to the chaos around them.

Congressional Democrats and some Republicans on Wednesday accused President Donald Trump of inciting a coup after an angry mob of his supporters stormed the U.S. Capitol, interrupted the proceedings to cement President-elect Joe Biden's victory and triggered an evacuation of lawmakers.

Throngs of pro-Trump rioters busted through security barricades, breaking windows, climbing on rafters, ripping down U.S. flags and roaming the Senate chamber. Lawmakers were told to grab gas masks as police deployed tear gas inside the Rotunda, the ornate area under the dome that connects the House and the Senate.

A trio of Trump's most vocal GOP critics in Congress over his efforts to undermine the election results assailed the president.

Sen. Mitt Romney, R-Utah, released a blistering critique of Trump, saying the day's events were the result of a "selfish man's injured pride and the outrage of his supporters whom he has deliberately misinformed for the past two months and stirred to action this very morning. What happened here today was an insurrection, incited by the President of the United States."

Rep. Adam Kinzinger, R-Ill., who called it a "coup attempt," tweeted directly to Trump: "You are not protecting the country. Where is the DC guard? You are done and your legacy will be a disaster."

And Sen. Ben Sasse, R-Neb., said the Capitol "was ransacked while the leader of the free world cowered behind his keyboard - tweeting against his vice president for fulfilling the duties of his oath to the Constitution."

"Lies have consequence," Sasse added. "This violence was the inevitable and ugly outcome of the president's addiction to constantly stoking division."

Rep. Don Bacon, R-Neb., also blamed Trump's rhetoric, saying, "our president should have given a much more clear tone. Leaders create calmness and direction; they don't inspire people to get angry and do the things that they're doing."

He called on the president to "stand up and be a better leader on this, because he has not been in my view. . . . He needs to respect the peaceful transition of power."

Former congressman Will Hurd, R-Tex., who retired last year over his frustrations with Trump's takeover of the party, called the storming of the Capitol an act of "domestic terrorism."

"This should be treated as a coup led by a president that will not be peacefully removed from power," Hurd tweeted.

Democrats, tweeting from safe spaces within the Capitol, reacted passionately to the chaos around them.

"This is thuggery at its best," tweeted Rep. Adriano Espaillat, D-N.Y. "And the flames are being stoked by the person currently in our #WhiteHouse. Donald Trump is responsible for this. #TrumpThugs."

"On August 24, 1814, the British stormed our Capitol and set fire to it," tweeted Sen. Cory Booker, D-N.J. "Now the Capitol has again been breached and sieged. Donald Trump incited this. He is responsible for this. And he is silent as this tragic moment continues."

Trump eventually released a one-minute taped statement telling his supporters to "go home now." Still, he continued his baseless claim that the presidential election was "fraudulent."

"I know your pain, I know your hurt. We had an election that was stolen from us. It was a landslide election, and everyone knows it - especially the other side," he said, reiterating the same false allegations that have incensed his supporters. "But you have to go home now. We have to have peace. We have to have law and order, we have to respect our great people in law and order. We don't want anybody hurt."

Many saw Trump's statement as falling short of his responsibility as president to quell the unrest. Some Democratic lawmakers suggested they wanted immediate action taken against the president and certain Republican lawmakers for any role they played in inciting Wednesday's violence.

Rep. Ilhan Omar, D-Minn., said she would ready documentation to impeach the president. "I am drawing up Articles of Impeachment," she tweeted. "Donald J. Trump should be impeached by the House of Representatives & removed from office by the United States Senate. We can't allow him to remain in office, it's a matter of preserving our Republic and we need to fulfill our oath."

"This is outrageous, and the president caused it," Rep. David N. Cicilline, D-R.I., said on Twitter. "We should impeach and convict him tomorrow."

Rep. Cori Bush, D-Mo., said she will call for the "expulsion of the Republican members of Congress who incited this domestic terror attack on the Capitol."

In a statement, Sen. Josh Hawley, R-Mo., the first senator to announce that he would object to certifying Biden's electoral college victory, said the "violence must end."

Those "who attacked police and broke the law must be prosecuted, and Congress must get back to work and finish its job," he added.

At least some Republicans reconsidered their support for opposing the electoral college results after the attack on the Capitol. Rep. Cathy McMorris Rodgers, R-Wash., said she would now vote to uphold them and called on the president to "condemn and put an end to this madness."