"Time For Tolerating China's Trade Abuses Is Over": Donald Trump At UN

"For years, these (trade) abuses were tolerated, ignored, or even encouraged," he told the UN General Assembly, arguing that "globalism" had caused world leaders to ignore their own national interests. 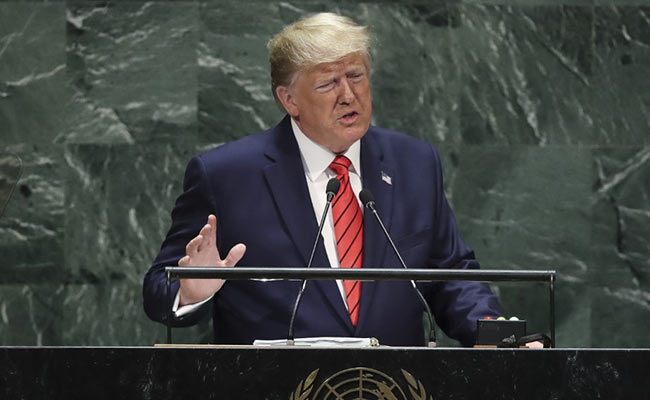 US President Donald Trump put China on notice at the United Nations on Tuesday over its handling of the Hong Kong crisis, urging Beijing to protect the former British territory's "democratic" way of life.

Trump told the UN General Assembly his administration was "carefully monitoring" pro-democracy protests that have sparked the gravest political crisis in the Asian financial hub since its handover from Britain to China in 1997.

"The world fully expects that the Chinese government will honor its binding treaty... (and) protect Hong Kong's freedom and legal system and democratic ways of life," he added.

"How China chooses to handle the situation will say a great deal about its role in the world and the future," the Republican tycoon added during his third appearance at the diplomatic forum in New York.

It marked one of his most strident speeches on the crisis since massive anti-government protests broke out in Hong Kong three months ago.

Until Tuesday, Trump had largely left it to the State Department to demand respect for the handover treaty which grants the territory a "high degree of autonomy," its own judicial, legislative and executive system, and the protection of its "way of life."

Trump also fired a shot across China's bow on international trade, declaring that the time of Beijing's "abuses" of the system was "over."

"For years, these (trade) abuses were tolerated, ignored, or even encouraged," he said, arguing that "globalism" had caused world leaders to ignore their own national interests.

Touting what he argued were the benefits of his tariff war with China, Trump reiterated his hope that a trade agreement "beneficial to both countries" could be struck.

"But as I said very clearly, I will not accept a bad deal for the American people," he said.

(Except for the headline, this story has not been edited by NDTV staff and is published from a syndicated feed.)
Comments
Donald Trump At UNTrump Speech At UNDonald Trump On China