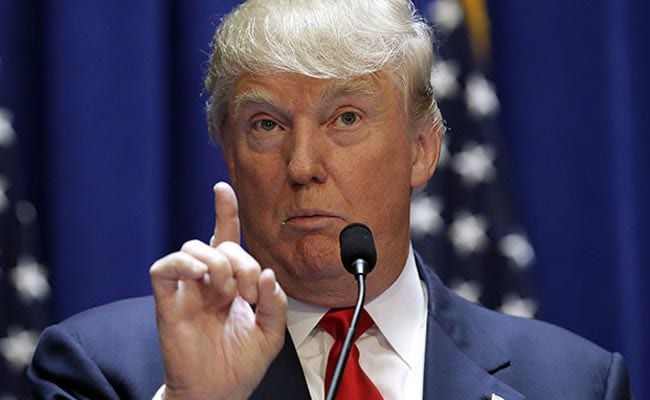 Donald Trump's comments came as two former Disney employees alleged that they were forced to train their Indian replacements as the entertainment group sought to bring in cheaper foreign workers on H-1 B visas. (Reuters photo)

Washington: Leading Republican presidential hopeful Donald Trump has asked Disney to hire back every one of the workers they replaced with cheaper foreign IT workers on H-1 B visas largely from India.

"If I am President, I will not issue any H-1B visas to companies that replace American workers and my Department of Justice will pursue action against them," he told Breitbart News when asked about reports that about 250 Disney workers were forced to train their foreign replacements.

Mr Trump said lobbyists write the rules to benefit the rich and powerful and accused rival Republican presidential candidate Marco Rubio of being in the pay of Silicon Valley CEOs.

"They buy off Senators like Senator Marco Rubio to help them get rich at the expense of working Americans by using H-1B visas-so called "high tech" visas-to replace American workers in all sorts of solid middle class jobs."

Mr Trump also called on Mr Rubio to rescind his sponsorship of a bill for expanding the H-1B programme and "return the money he has received from Silicon Valley CEOs and to donate the money to a charity helping unemployed Americans whose jobs Rubio has helped to destroy."

Mr Trump's comments came as two former Disney employees alleged that they were forced to train their Indian replacements as the entertainment group sought to bring in cheaper foreign workers on H-1 B visas.

David Powers and Leo Perrero who worked at Disney World told WWSB ABC 7, a local Florida TV station that shortly after "a great performance review," a VP invited them into his office and told them they were being laid off.

"I'm in the room with about two-dozen people, and very shortly thereafter an executive delivers the news that all of our jobs are ending in 90 days, and that we have 90 days to train our replacements then we won't get a bonus that we've been offered," Mr Perrero, a former app developer for Disney was quoted as saying.

On top of the job loss, the two men told ABC 7 that training their Indian replacements -- at their own desks, no less -- stripped them of their dignity.

"I felt extremely un-American," Mr Perrero says. "I felt like I was part of destroying our economy because I had to train a replacement that was going to come here, take my job and potentially take other people's jobs."

Sarasota-based employment Attorney Sara Blackwell, who is representing both men, told the channel that this isn't just a problem with Disney. Companies, including Toys R Us, IBM and Verizon, have been contracting with companies and outsourcing work.

"H1B, when done properly, is a great avenue," she said. "The purpose of H1B is to bring in foreign workers, when there's no qualified US worker."

But when Disney lets go of more than 250 employees at once, something doesn't add up.

In response, ABC 7 said, Disney acknowledged it outsourced Mr Powers' and Mr Perrero's jobs to Indian workers, but also claimed they've expanded and added jobs for US IT workers.