"Have Confidence In US Intelligence", Says Trump After Helsinki Summit

US lawmakers roundly condemned Donald Trump for his comments at a news conference with Putin where he cast doubt on his own intelligence agencies. 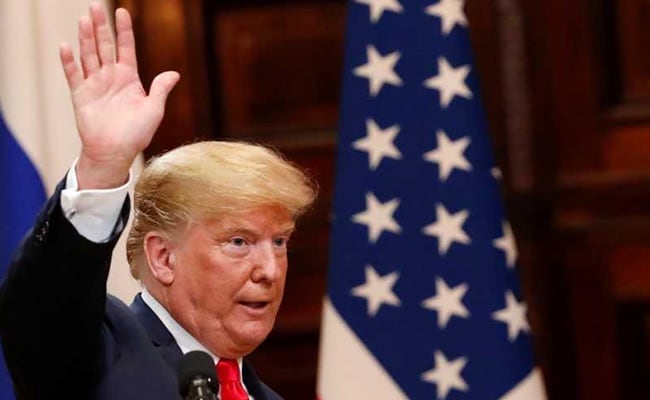 Donald Trump refused to blame Putin for Russian meddling in the 2016 election. (Reuters)

US President Donald Trump, facing a barrage of criticism for his comments during a news conference in Helsinki with Russian President Vladimir Putin, insisted in a post on Twitter on Monday that he has "GREAT confidence in MY intelligence people."

US lawmakers roundly condemned Trump for his comments at a news conference with Putin where he cast doubt on his own intelligence agencies' findings that Russia meddled with the 2016 US presidential election.

"As I said today and many times before, 'I have GREAT confidence in MY intelligence people'," Trump said on Twitter. "However, I also recognize that in order to build a brighter future, we cannot exclusively focus on the past - as the world's two largest nuclear powers, we must get along!"

At the news conference, Trump cast doubt on the findings of American intelligence agencies and refused to blame Putin for meddling in the 2016 election. "I will tell you that President Putin was extremely strong and powerful in his denial today," Trump told reporters.

Lawmakers from both major political parties derided Trump's remarks, with both Democrats and Republicans saying the US president appeared weak in front of Putin.

The Director of National Intelligence, Dan Coats, who had been nominated by Trump, reiterated in a statement that the intelligence community had been clear in assessments of Russian meddling in 2016 and Moscow's ongoing, pervasive attempts to subvert democracy in the United States.

(Except for the headline, this story has not been edited by NDTV staff and is published from a syndicated feed.)
Comments
Donald TrumpVladimir PutinHelsinki Summit