The committee said it has reason to believe Steve Bannon has "information relevant to understand important activities that led to and informed the events at the Capitol." 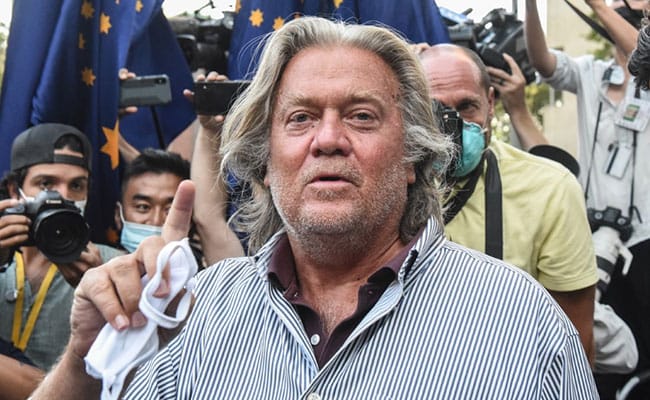 A federal grand jury returned the indictment in a significant victory for the House Select Committee to Investigate the January 6 Attack, which is battling efforts by Trump and top aides to use presidential privilege to block testimony and documents necessary for the probe.

The indictment came hours after Trump's former chief of staff, Mark Meadows, declined to show up for an committee deposition after being subpoenaed, which could lead to similar charges of contempt.

Investigators think Meadows and Bannon could have information on links between the White House and the Trump supporters who invaded the Capitol to prevent the certification of Joe Biden as winner of the November 2020 presidential election.

Bannon, 67, was charged with two counts of contempt -- for ignoring subpoenas to appear for a deposition and for failing to supply documents to the committee.

Each count carries a penalty of one month to one year in jail.

The committee subpoenaed Bannon, 67, on September 23. He was among the first of dozens of people who have been called to testify on the violent attack to shut down Congress on Trump's baseless claims that Biden had won the election due to massive voter fraud.

The attack, during which five people died, succeeded in delaying the joint House-Senate election certification session for several hours.

The committee said Bannon has relevant information to understanding how the attack came about.

It pointed to his presence on January 5 in activities focused on blocking the certification, when he said: "All hell is going to break loose tomorrow."

After Trump claimed executive privilege to block the committee from interviewing his advisors and accessing his records, Bannon refused to testify.

On October 21 the House voted to refer contempt of Congress charges against Bannon to the Justice Department.

Given the highly political background of the case, it was not clear the Justice Department would take action until Friday's grand jury indictment.

"Since my first day in office, I have promised Justice Department employees that together we would show the American people by word and deed that the department adheres to the rule of law, follows the facts and the law and pursues equal justice under the law," Attorney General Merrick Garland said in a statement.

"Today's charges reflect the department's steadfast commitment to these principles," he said.

In Bannon's case, the committee rejected Trump's privilege claim, saying Bannon was a private citizen who had not worked in the White House since 2017.

Meadows' case for executive privilege protections could be stronger, as he was working in the White House with Trump on January 6.

His case could hinge on the outcome of a court battle between Trump and the committee over administration records in the National Archives related to the January 6 events.

After Biden, using his power as serving US president, waived the privilege over the documents, a judge on Tuesday said Trump, as only a former president, could not block them.

But Trump has appealed the case to a federal appeals court, where the case will be heard on November 30.

The case is unprecedented, pitting a former president and serving president against each other over who can wield and waive privilege.

That makes it likely the dispute will to go to the Supreme Court for a final ruling.