The verdict is not only a blow to Roger Stone but renews scrutiny on Trump's actions as a candidate at a time when he faces an impeachment inquiry that could derail his presidency. 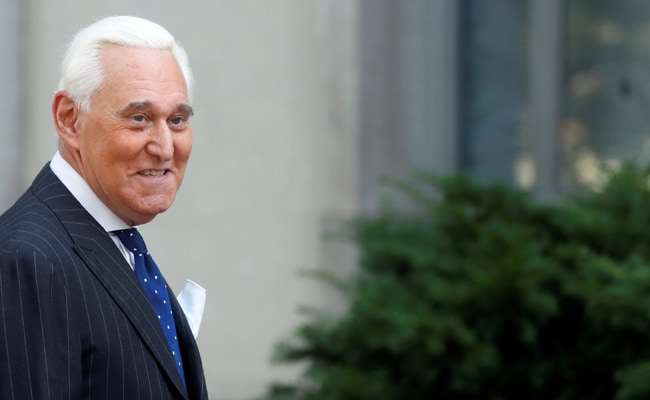 The verdict, in a trial arising from former Special Counsel Robert Mueller's investigation that detailed Russian interference in the 2016 US election, is not only a blow to Stone but renews scrutiny on Trump's actions as a candidate at a time when he faces an impeachment inquiry that could derail his presidency. Trump denounced the verdict.

Before the verdict was announced, Stone arrived at the courthouse attired in a pinstripe suit, blue tie with white dots, white handkerchief in his pocket, arm in arm with his wife, sunglasses in one hand, a small red copy of the Bible in the other and a smile on his face. When the verdict was read, Stone faced the jury of nine women and three men, and showed no outward signs of emotion as he was pronounced guilty.

Stone, 67, was one of several former Trump aides to have been charged in Mueller's investigation and one of only two not to plead guilty but rather go to trial. The other was former Trump campaign chairman Paul Manafort, a one-time business partner of Stone who was convicted by a jury last year in Virginia of tax and bank fraud charges and is now imprisoned.

Stone, a longtime Republican political operative who has called himself a "dirty trickster" and "agent provocateur" was charged with obstructing justice, witness tampering and lying to the US House of Representatives Intelligence Committee during its investigation into Russian election interference.

He has been a friend of Trump for decades.

"So they now convict Roger Stone of lying and want to jail him for many years to come," Trump wrote on Twitter after the verdict. Trump then asked why it was not a series of his adversaries including his 2016 opponent Hillary Clinton and "even Mueller himself? Didn't they lie?"

"A double standard like never seen before in the history of our Country?" Trump added.

The sentencing date was set for February 6. Stone faces the potential of numerous years in prison.

Stone's colourful trial in federal court in Washington was as much about the rough-and-tumble world of politics as it was about technical legal arguments, such as whether Stone truly lied about WikiLeaks since that website was never explicitly mentioned in the intelligence committee's publicly stated parameters of its probe.

The trial featured multiple references to the film "The Godfather Part II," a Bernie Sanders impression by a prosecution witness, and testimony by political heavyweights including former Trump campaign CEO Steve Bannon and former Trump deputy campaign chairman Rick Gates. Those witnesses said they believed Stone had inside information about when WikiLeaks might release more damaging emails about Clinton.

Prosecutors accused Stone of telling lawmakers five different lies related to WikiLeaks and its founder Julian Assange, which in 2016 disclosed a series of damaging emails about Democrat Clinton that US intelligence officials and Mueller determined had been stolen by Russian hackers.

Some of those lies related to the existence of certain texts or emails, while others pertain to Stone's conversations with Trump campaign officials and a supposed "intermediary" with WikiLeaks in early August 2016 whom Stone identified to lawmakers as being comedian Randy Credico.

After the judge set Stone's sentencing date, prosecutor Jonathan Kravis asked the judge to detain Stone pending sentencing, saying that the night before Alex Jones from the conspiracy theory website Infowars claimed Stone had sent him a message. Stone was under a gag order from the judge not to speak about the case. The request was denied.

Trump is facing an impeachment inquiry in the US House of Representatives focussing on his request that Ukraine carry out two investigations that would be politically beneficial to him including one targeting Democrat Joe Biden.

Prosecutors said Stone did not actually start talking to Credico about WikiLeaks until later that month, and the actual person to whom he was referring in testimony as an "intermediary" was conservative author Jerome Corsi, who Stone dispatched in an email to "Get to Assange!" and get the emails.

Corsi was not called as a witness in the trial.

Stone, a close Trump ally who famously has the face of former president Richard Nixon tattooed on his back, was also accused of tampering with a witness, Credico, when Credico was summoned to testify before Congress and speak with the FBI.

Both Stone and Credico have since said that Credico did not act as a WikiLeaks back channel. Credico could not immediately be reached for comment on the jury verdict against Stone.

WikiLeaks made public a private Twitter exchange between itself and Stone in which the website distanced itself from Stone, saying "false claims of association are being used by the democrats to undermine the impact of our publications."

In emails and texts, the jury saw messages that Stone had sent Credico that included comments like "Prepare to die," "You're a rat. A stoolie," and "Stonewall it. Plead the Fifth. Anything to save the plan," in a reference to a famous Nixon Watergate quote.

He also repeatedly urged Credico to "do a Frank Pentangeli" - a reference to a "Godfather II" character who recants his congressional testimony against a mobster amid intimidation.

A lawyer for Stone dismissed the Pentangeli reference, saying Credico had done impressions of the character in the past, and said the "odious language" they used was just part of how they interacted.