Istrail is a serial entrepreneur with a startup called Pheo Coffee. His selling point is using part of his profits to fund health care for people in Third World countries. 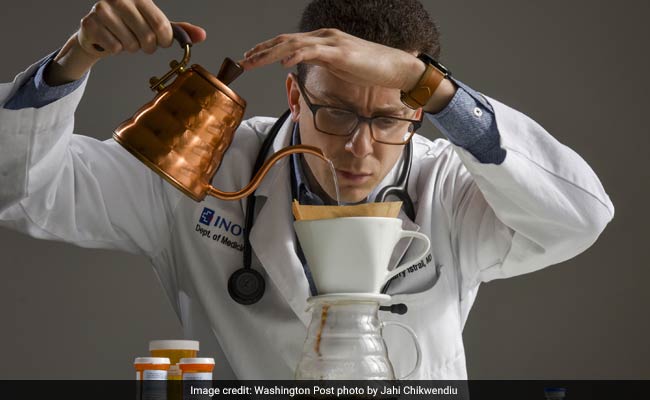 Coffee is as much a part of my morning as CNBC and the newspapers. I drink my daily mug of java - with its big T on the side for you-know-who - with a healthy splash of skim milk.

It shakes me out of my fog and thrusts me toward the day.

I was still in morning-buzz mode when Larry Istrail, a 32-year-old Virginia physician, pitched me on his medical-themed coffee company.

Hmm. What was an internist on a physician's salary at Inova Fairfax Hospital doing selling coffee on the side?

Istrail is a serial entrepreneur with a startup called Pheo Coffee. His selling point is using part of his profits to fund health care for people in Third World countries.

Noble idea. But let's be honest here. Istrail - or Dr. Larry on his website - sold a mere $25,000 worth of coffee beans last year.

But his little project speaks to a couple of compelling points. The first is that he has audacity, pluck or whatever word you want to ascribe to that essential quality that drives entrepreneurs. I mean, how many doctors are out there slinging coffee beans on the side?

He has a laid-back style that belies a certain intensity, whether it is applied to sports, school or business. Istrail has already invented a couple companies, including a diet app that calculated the nutrition from a photo of the meal you were about to eat. That fizzled, along with his dream of a radio/stethoscope.

The other appealing quality is an instinct for accountability. Istrail made Pheo Coffee a for-profit because he thought it would have more edge than a charity.

"A traditional nonprofit, at the end of the day, is a company asking others for money for their cause," Istrail said. "Apart from the good feeling . . . there is usually nothing tangible, usable or enjoyable that the donor gets. There is also a lot of public distrust in charity. You don't always know where your money is actually going. Is it helping the cause directly or is it funding the intern's summer salary?"

His plan is to capture enough of the 400 million cups consumed in the United States every day to "create a sustainable pipeline of happy coffee drinkers funding health care abroad," said Istrail, who drinks two cups a day. "Our mission is to provide freshly roasted coffee delivered to your door."

To further separate his coffee from the pack and give the brand some personality, Dr. Larry named his coffees after important medical figures. He has packaged his orders in an appealing bag and label with an illustration of the historical figure. He even built the website.

Pheo's X brand is a Brazilian breakfast blend named for Wilhelm Rontgen, who discovered X-rays. South American Butterfly is for Florence Nightingale, the founder of modern nursing. Dulci Vitrioli is a single Mexican bean. It's a Latin phrase that salutes William T.G. Morton's first use of anesthesia. And Norelpi is an Ethiopian bean coffee named for the man who discovered adrenaline.

Pheo's earnings have been enough to fund a dozen surgeries around the world: a $28 tooth extraction in Malawi, an operation to remove a benign mass from a man's leg in Uganda and a $1,500 treatment for a congenital heart defect in Myanmar, also known as Burma. Pheo finds the cases through a San Francisco-based project called Watsi.

To assureeach customer that their money went to help someone, every coffee delivery includes a story of the person who was helped by the purchase and the date that Pheo donated the money to Watsi.

He has zero employees; Istrail relays his online orders - which can vary from a couple of dozen to as many as 300 in one week - to a Virginia roaster named Lone Oak Coffee in Winchester, Virginia. He then packages and ships the orders himself from his Arlington apartment. Istrail tried roasting at home on a skillet, but after some misfires, he outsourced the roasting to Lone Oak.

Istrail said November and December were busy months, especially with gift boxes that included coffee, a Pheo T-shirt and a Pheo coffee mug with the diagnosis code for caffeine deficiency on the mug.

"We spend an absurd amount of time on our packaging and label designs to create a gift," Istrail said. Some labels, such as Dulci Vitrioli, include historical quotes, such as "Gentleman, this is no humbug!"

Istrail designed the labels himself and buys the bags in bulk online. He ships through UPS, FedEx and the U.S. Postal Service. Pheo Coffee pays for shipping all orders above $60.

The prices range from $15.99 for a 12-once bag of Butterfly to $22.99 for X brand. Istrail said he nets $7 to $12 in gross profit on each bag. After he pays for shipping, bags and labels, he splits the rest between himself and his medical care donations. The company is an S corp., which means all the businesses profits appear on his personal income tax.

Istrail might get his ambition from his immigrant parents. They came to the United States from Romania in 1983. His father is a computer science professor at Brown University, and his mother is a software engineer. Istrail spent some of his childhood in New Mexico before the family moved to Montgomery County, where he captained the Richard Montgomery High School basketball team.

He hoped for a spot in college basketball and even spent a year at the prestigious Lawrenceville School in New Jersey, in the hope of getting noticed. He did get a few offers, but instead got turned on to business - and developed a taste for coffee.

"My year at Lawrenceville was . . . when I decided I wanted to become a doctor," he said. "It was when I was able to take classes like robotics or architecture that got me interested in creating products and building interesting things."

He ended up at Boston University and then at Virginia Commonwealth University School of Medicine, from which he graduated in 2015. During college and medical school, he tried out his new ideas, including a weight loss registry iPhone app and the idea for his stethoscope that would have a speaker so an entire room could hear a heart beat.

"Entrepreneurship reminds me of basketball," he said. "You train every day to build toward an ultimate goal, whether its to go to the NBA, build an app or start a company. It seems impossible, but . . ."

Istrail accompanied an endocrinologist on rounds one day as a resident, when he saw a patient with a set of symptoms that included high blood pressure, a racing heartbeat, sweat, tremors and anxiousness.

The rare condition is called pheochromocytoma. It became the Pheo in his coffee.

"The patient looked like she was running from a bad guy, and had too much coffee," Istrail said. "That started me on my silly idea."

I applaud Dr. Larry's ambition, but my prognosis for the physician's little project is dim. Coffee is everywhere. In addition to the big names, Starbucks, Peet's, Dunkin' Donuts, there are a million smaller competitors.

"I became addicted to the idea of looking off into the horizon at some seemingly unattainable goal, and then working my butt off each day to make it happen. Whether it was waking up at 5 a.m. every morning before school to train for basketball or staying an extra hour at the hospital. Pheo Coffee is no different."

(Except for the headline, this story has not been edited by NDTV staff and is published from a syndicated feed.)
Comments
Inova Fairfax HospitalPheo Coffee