Pope Francis spoke after remarks by Muslim and Jewish leaders, by other Christians, and by German Chancellor Angela Merkel, who held talks with the pope earlier in the day. 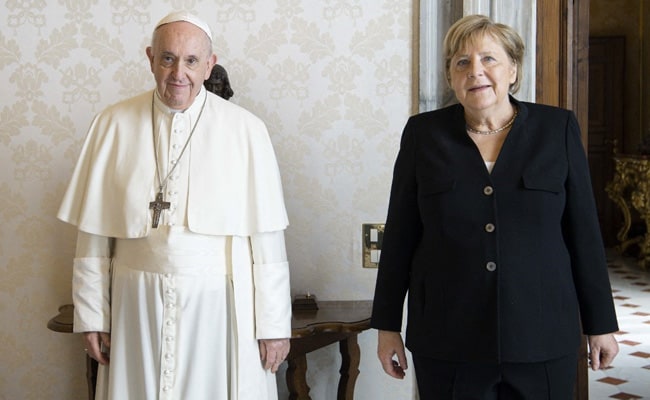 Pope Francis called the arms trade a bane of humanity on Thursday.

Pope Francis, closing a peace meeting of world religions, called the arms trade a bane of humanity on Thursday, saying that money spent on weapons should be diverted to feed the hungry and distribute vaccines fairly.

"Fewer arms and more food, less hypocrisy and more transparency, more vaccines distributed fairly and fewer weapons marketed indiscriminately," Francis said in his address at the event in front of the ancient Colosseum.

Francis spoke after remarks by Muslim and Jewish leaders, by other Christians, and by German Chancellor Angela Merkel, who held talks with the pope earlier in the day.

"War plays games with human lives. So does violence and the bane of a burgeoning arms trade, often moving in the shadows, fed by underground streams of money," Francis said.

Francis has called for disarmament and for a total ban on nuclear weapons in the past.

"Let us unambiguously urge that arms be set aside and military spending reduced, in order to provide for humanitarian needs, and that instruments of death be turned into instruments of life," he said.

The annual international meeting of religious leaders has been organised since 1986 by the Rome-based Sant'Egidio Community, a worldwide Catholic charity and peace group.

Both Francis and Rabbi Pinchas Goldschmidt, president of the Conference of European Rabbis, noted that they were before an amphitheatre used for brutal mass entertainment in Roman times.

"Today, we too can be spectators of violence and war, of brothers killing brothers, like games we watch from a safe distance, indifferent, certain that they will never affect us. The suffering of others scarcely troubles us," Francis said.

"Not even the sufferings of victims of war, migrants, young boys and girls trapped in conflicts and robbed of the carefree games of childhood. The lives of peoples and young children are not playthings," he said.

Both the pope, who has often condemned "vaccine nationalism", and Ahmed al-Tayeb, the Grand Imam of al-Ahzar mosque and university in Cairo, spoke of vaccine inequality during the COVID-19 pandemic.

Tayeb said that while large sectors of people in developed countries were vaccinated against COVID-19, in parts of Africa it was only 2-3% of populations.

"This crisis has laid bare an extreme poverty of the duty of conscience and responsibility," Tayeb said.

Merkel said people had to keep their eyes fixed on those who were suffering the most.

"I come from a country that has learned from its past," Merkel said. "I hope that all of us continue in a spirit of tolerance."