Diana was about to get engaged to wealthy playboy Dodi Al Fayed in Paris when they tried to escape a pack of photographers. 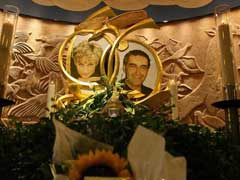 The last day of Princess Diana's life began on the top deck of her lover's yacht, with croissants and fresh jams.

Diana and her beau, Dodi Al Fayed, sipped their coffee marveling at the breathtaking Emerald Coast in Sardinia. Diana took hers with milk. Fayed took his black. There were kiwis, too.

"They were in a good mood," his butler remembered later. "They were always laughing, holding hands."

Their romance was a whirlwind - passionate, thrilling, scandalous. Fayed, the son of Harrod's department store owner Mohamed Al-Fayed, was a rich playboy. Diana, divorced from Prince Charles after he cheated on her, was the mother of the future king of England and the most photographed woman in the world.

That Saturday - Aug. 30, 1997 - promised to be a moment of change. The princess knew it. She snuck a call to Richard Kay, a friend who covered the Royals for the Daily Mail, and told him, as he later wrote, "she had decided to radically change her life."

"She was going to complete her obligations to her charities," Kay continued, "and then, around November, would completely withdraw from her formal public life." Diana had not told Kay why, but he had a hunch: "They were, to use an old but priceless cliche, blissfully happy. I cannot say for certain that they would have married, but in my view it was likely."

Last week, in the Daily Mail, Kay published an article with this headline: "Was Diana about to dump Dodi?" In it, he quoted Diana's private secretary saying she'd planned to return home after becoming bored with Fayed.

"It's very much a personal view," the secretary said, "but I don't think she would have seen Dodi again once she got back."

Whatever the case, Fayed wanted to propose that fateful night. It was summer. As they were on holiday, Britain announced plans to invite the Irish Republican Army for peace talks. Conspiracies theories about the suicide of Vincent Foster, President Bill Clinton's lawyer, were spreading. Israel and Lebanon were sparring with one another.

Fayed's primary concern was the six-figure diamond ring waiting in Paris. People close to Fayed said the couple picked it out a week earlier even though they had been dating less than a month.

The danger of their relationship wasn't its brevity. To royal watchers, to Buckingham Palace, and no doubt to the British tabloids whose photographers were hounding them, the threat was something the couple apparently had not yet considered, even as rumors swirled that Diana was already pregnant.

"For the mother of the future king of England to bear the child of a Muslim Arab, a child who would be the half sibling of the heir to the throne, would be embarrassing in the eyes of the royal family and the ruling Establishment," former Time magazine reporters Tom Sancton and Scott MacLeod wrote in their book, "Death of a Princess."

Fayed's calendar that day had just one entry - at 6:30 p.m., he was to pick up the ring at a store near his father's hotel in Paris, The Ritz. They left the boat for Fayed's plane around 11:30 a.m., taking along the butler and a masseuse for Fayed's painful back.

As soon as they landed in Paris, Fayed saw the paparazzi out his window.

"Dodi did not want this special occasion ruined by a bunch of a shutter-happy cowboys trying to corral them on motorcycles and shoving lenses in their faces," the ex-Time reporters wrote. "As soon as the door opened, cameras started clicking."

The aggressiveness of the photographers - and their sheer numbers - would increase as the day progressed.

Diana and Fayed arrived at The Ritz in the late afternoon. She went to the salon for a hair appointment. He went to the jeweler. The couple then rested in the hotel's Imperial Suite before going to Fayed's apartment to get dressed for dinner. She checked in with her children, who were in Scotland with Prince Charles and the queen.

"On that Saturday evening, Diana was as happy as I have ever known her," her friend Kay wrote in the Daily Mail. "For the first time in years, all was well with her world."

They left for Fayed's apartment around 7 p.m., trailed by photographers. More were waiting at the building's front door when they arrived. Fayed fumed. There was an ugly shoving match.

Once inside, Fayed pulled his butler aside, telling him about his plan to propose that night.

"The ring was on the nightstand in his bedroom," author Christopher Anderson wrote in "The Day Diana Died." "Dodi had checked to make sure they had several bottles of Dom P&#233;rignon on ice for the big moment."

But dinner was a bust.

The first restaurant they tried - Chez Benoit, a cozy, casual bistro not far from the city center - was quickly overrun by photographers. They split and headed for The Ritz, ducking into the dining room hoping to be left alone.

"No sooner had they ordered," the ex-Time reporters wrote, "they began to feel the indiscreet stares of other diners."

The couple left and had the food delivered to the Imperial Suite. Fayed's plan was in shambles. They had to get back to the apartment. But how? The hotel was swarming with photographers.

Fayed devised a plan: The couple's driver and bodyguards would make a big show out front, appearing to get their caravan of Mercedes sedans ready to leave. Meanwhile, the Princess and Fayed would slip out the back door, in a borrowed car driven by a hotel security officer.

What happened next was the subject of lengthy investigations and conspiracy theories that live on today. The couple did get away. But the driver, it turned out, was drunk.

As the couple sped off, the photographers out front got tipped off about the escape, quickly catching up on their motorcycles. Their driver darted in and out of traffic, wrecking spectacularly inside the Pont de l'Alma tunnel near the Eiffel Tower.

Her death startled the world.

An up-and-coming anchor named Brian Williams broke into regular coverage on MSNBC to announce the news to Americans in the early morning hours of Aug. 31.

"I've just been handed from the Reuters news service what has been marked 'bulletin,'" Williams said, speaking slowly. "It says, 'Princess Diana has died.'"

(This story has not been edited by NDTV staff and is auto-generated from a syndicated feed.)
Comments
Princess Diana's lifeprincess diana deathPrincess Diana Car crash