Del Vecchio, whose father died five months before he was born, would spend the next seven years at the institution. Precocious, he was allowed to leave early- at age 14- to start working. 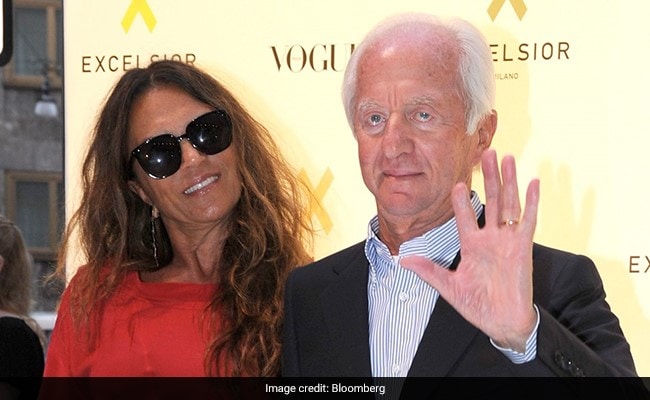 Del Vecchio stands out in terms of how far he's come.

With her fourth child living as a street urchin in war-torn Milan in 1942, Grazia Rocco, a widow, made a fateful decision: she appealed to the city's orphanage to take in the seven-year-old, Leonardo Del Vecchio.

"I don't have anyone to care for him," Rocco, whose days were spent working in a factory, wrote in a heartfelt letter that remained untouched for decades in Del Vecchio's file at the Martinitt Institute orphanage. Moving there, his mother said, would be the best hope of avoiding death for young Leonardo, who would go on to become one of Italy's richest entrepreneurs.

Del Vecchio, whose father died five months before he was born, would spend the next seven years at the institution. Precocious, he was allowed to leave early- at age 14- to start working.

His goal, Del Vecchio wrote at the time, was to become "a skilled craftsman," which he saw as a sure-fire way to ensure he'd never go hungry again- and would never have to answer to anyone but himself.

Nearly 75 years on, Del Vecchio finds himself at the head of EssilorLuxottica SA, the French-Italian eyewear giant with tens of thousands of employees, operations spanning the globe and a foothold in the luxury and medical technology sectors. The company, which owns the Ray-Ban and Oakley brands and makes frames for luxury houses like Armani and Prada, is also the world's top eyeglass retailer and the biggest producer of corrective lenses.

In the run-up to his birthday on May 22, Del Vecchio- who turns 87- is giving himself a new goal: to push EssilorLuxottica into the exclusive club of companies valued at more than 100 billion euros ($104 billion), from about 66 billion euros now.

Nothing in his demeanor suggests Del Vecchio sits atop a sprawling empire with such audacious ambitions. He has taken pains to stay out of the spotlight over the years and, until now, repeatedly declined to discuss his career and his trajectory with reporters, insisting that the company's performance speaks for him.

Not one to look back, he has never sought to view his file at the orphanage. In a rare conversation with a reporter, he spoke in simple, down-to-earth terms when asked about how he got to where he is today.

"I've always strived to be the best at everything I do- that's it," he said, sipping espresso at his private restaurant inside Luxottica's futuristic Milan headquarters. "I could never get enough," he said during another meeting, speaking slowly, almost shyly, as he toured the company's new showroom in the city's design district.

That meshes well with the image of a man who built his fortune through arduous 20-hour days which he says he doesn't regret one bit, even though his early time as a worker saw him lose part of his left index finger in a factory accident.

While the metal-shop apprenticeship Del Vecchio took upon leaving the orphanage in 1949 earned him his first paycheck, it was only 300 lire, about 15 euro cents, for a tough 10 days of work.

One of his jobs at the shop was to buy lunch for his co-workers, but he was so poor he could barely afford to purchase anything for himself, so the future billionaire subsisted on cabbage soup cooked by his mother, toting a steaming pot to work each morning.

Few would have believed at the time that Del Vecchio would someday attain personal wealth of almost $30 billion, putting him in the running to be Italy's richest person, along with the scions of the Nutella-making Ferrero family.

Although Del Vecchio stands out in terms of how far he's come, he shares some of his history with a landmark generation of patriarchs that came to dominate post-war Italian industry. That group includes Silvio Berlusconi, Luciano Benetton and Giorgio Armani, all of whom, like Del Vecchio, were born in the 1930s.

"Our generation experienced hard times that tempered us, the years of war and reconstruction," Armani said in an interview. "There was nothing, and we had to start from scratch," said the Italian designer, whose partnership with Del Vecchio was a game changer for the eyewear business in the 1980s.

Following the 2018 tie-up between Luxottica and France's Essilor, about 180,000 people work for Del Vecchio, from the tiny Dolomite village of Agordo in Italy where he founded his "factory" in 1961, to the US, where he listed Luxottica in 1990 on the New York exchange and later pulled off his most audacious deal, the acquisition of Ray-Ban. His 100 billion-euro goal is now another such marker.

Reaching that market-value target, Del Vecchio says, will help assure that the eyewear giant is strong enough to survive any technological disruption in the industry. That thinking also explains his 2014 decision to return to an operational role, despite the furor he created by ousting then-Chief Executive Officer Andrea Guerra.

For years, competitors have charged that Del Vecchio's Godfather-like powers at Luxottica have given him outsized influence over the industry. Other critics sniff that he's just another old Italian corporate founder unwilling to let go.

Del Vecchio shrugs all that off. "The company has changed more in the last 10 years than in the previous 50," he said. "We were stuck, I had to return to embrace change."

That's led him to push harder on online sales, buy up his biggest European retail rival, and move to gain control of the global lens business. EssilorLuxottica has also given some hints of its future direction through a deal with Meta Platform's Facebook.

Sixty years after founding Luxottica, Del Vecchio, a father of six from three different partners, admits that his dedication to the company came at a heavy price. In the early days, in particular, he spent very little time with his children.

"I put work before everything else and the factory became my real family," he said. In recent years he's made up for some of the lost time, and now spends most days with his extended family in Milan, or at his homes on France's Cote d'Azur and the island of Antigua.

That doesn't mean he has stopped thinking big. Some recent moves suggest Del Vecchio may be eyeing a role in the shakeup of the country's financial industry.

In addition to building up a stake that makes him the top shareholder at investment bank Mediobanca SpA, Del Vecchio was part of the investor group that challenged management at the country's biggest insurer, Assicurazioni Generali SpA.

The group came up short in its attempt to win control over the insurer, but for Del Vecchio the endgame could be about more than a mere management shakeup. He says he wants to help create a global leader in the finance industry.

"You need to be brave enough to keep doing things, to move forward," Del Vecchio said of his plans, arguing that other Italian entrepreneurs have lacked the drive to take their companies to the top.

Italians "are great artisans, great artists, but often we stop at that level," he said. "You have to have the courage to keep moving ahead."