Born in Milan on May 22, 1935, to a poor family, Leonardo Del Vecchio spent part of his youth in an orphanage and began working as a teenager. 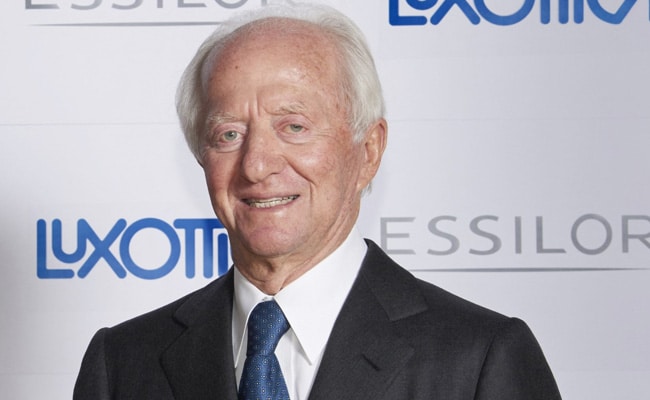 Leonardo Del Vecchio was a big name in Italy, and one of Europe's wealthiest men. (AFP File)

Italy's second richest man, eyewear magnate Leonardo Del Vecchio, died at the age of 87, his company said on Monday. Del Vecchio rose from childhood poverty to build the eyewear empire that owns brands such as Ray-Ban and Oakley.

His fortune was worth an estimated $27.3 billion, according to Forbes' 2022 World's Billionaires List.

Del Vecchio added Italian style of to spectacles and became one of Europe's wealthiest men. He even invested his money to build stakes in Italian financial companies Mediobanca and Generali.

The billionaire had been in intensive care at Milan's San Raffaele hospital in recent weeks, according to Italian news agency AGI.

Born in Milan on May 22, 1935, to a poor family, Del Vecchio spent part of his youth in an orphanage and began working as a teenager.

He founded his own company, Luxottica, in 1961, supplying the optical industry with components. A decade later, Del Vecchio made the strategic decision to control all parts of the production process.

Luxottica began making its own eyeglasses, distributing them throughout Italy before expanding in Europe through joint ventures.

In 2018, Luxottica merged with France's Essilor to become EssilorLuxottica, with Del Vecchio serving as chairman.

What will happen to his fortune now?

According to news agency Reuters, Del Vecchio's second wife Nicoletta Zampillo, whom he remarried in 2010 seven years after their divorce, stands to inherit his 25 per cent stake in his Delfin holding company.

The remaining 75 per cent of the Luxembourg-based holding company will be equally split among his six children - three from his first marriage, one with Zampillo and two from another relationship.

Delfin's main asset is a 32% stake in EssilorLuxottica.

Free Period Products' Access In This Country, A First In The World