Daniel Frisiello was taken into custody by the FBI "without incident" Thursday, Assistant Special Agent in Charge Peter Kowenhoven told reporters in Boston. 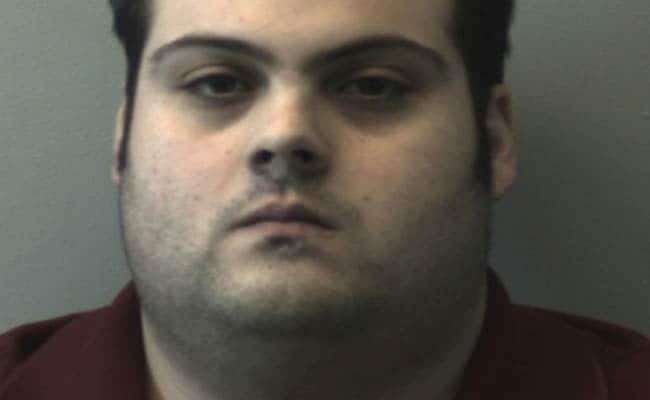 Daniel Frisiello was taken into custody by the FBI "without incident" Thursday, Assistant Special Agent in Charge Peter Kowenhoven told reporters in Boston. The 24-year-old from Beverly, Massachusetts, faces five counts of mailing threatening communications and false information and hoaxes, according to a criminal complaint filed in U.S. District Court in Massachusetts.

One envelope, sent last month from Boston to the New York home of the president's son, was filled with a white powder that spilled out "onto the addressee's wife," according to the complaint. Addressed to "DonalD trump Jr," it included a note that read: "You are an awful, awful person, I am surprised that your father lets you speak on TV. You make the family idiot, Eric, look smart. This is the reason why people hate you, so you are getting what you deserve. So shut the [expletive] up."

Frisiello is also accused of sending racist, vulgar and verbally abusive letters to Sen. Debbie Stabenow, D-Mich.; a Stanford law professor; a federal prosecutor; and soap star-turned-congressional aspirant Antonio Sabato. Each of those envelopes contained white powder as well, though authorities said all of the substances - including that sent to the president's oldest son - were found to be "nonhazardous."

Frisiello's attorney could not immediately be reached for comment on the case.

New York police said last month that a letter containing "an unidentified substance" was mailed to Donald Trump Jr.'s home and that it was opened by his wife, Vanessa.

She was taken to a hospital as a result, but Trump later said that his wife and children were "safe and unharmed."

He also suggested at the time that the letter may have been motivated by political rancor, writing on Twitter that it was "disgusting that certain individuals choose to express their opposing views with such disturbing behavior."

A spokesperson for Trump did not immediately respond Thursday to a request for comment.

An FBI spokeswoman said Frisiello was taken into custody early Thursday on his way to work.

Following his arrest, Frisiello, an employee at the Catholic Charities of Boston's Peabody Child Care Center, was immediately placed on leave, the organization said in a statement. The organization said the FBI advised that the charges did not involve his role at the child-care facility.

The U.S. attorney's office in Massachusetts said Frisiello is accused of sending five envelopes containing "suspicious white powder and a note indicating or implying that the powder was dangerous or intended to cause harm."

Although the criminal complaint said that testing determined the powder was nonhazardous, federal authorities have said that does not make the letters less threatening.

"This investigation should remind people that law enforcement will prioritize finding and charging those who try to cause panic by sending threatening letters containing what looks like dangerous substances," Andrew Lelling, U.S. attorney for the District of Massachusetts, said in a statement.

"Beyond terrifying the victims, these incidents caused law enforcement agencies around the country to spend time and money deploying emergency response units," he added. "Thankfully, the white powder in these letters was inert and no one was harmed. This does not change the fact that the defendant allegedly used the internet, the U.S. Mail, and popular fears of biological weapons to threaten and frighten people who did not share his views, and that is something we will prosecute accordingly."

The letter to Stabenow was a foul-mouthed rant that appeared to reference the sentencing hearing for Larry Nassar, the disgraced former USA Gymnastics doctor who was convicted of numerous sex crimes.

A spokesman for the senator declined to comment Thursday to The Washington Post, saying in an email that "to ensure the safety of our staff and constituents, our office doesn't comment on threats or other security matters."

A letter to Stanford University professor Michele Dauber referenced the controversy surrounding Judge Aaron Persky, who handed down what many perceived to be a soft sentence in a sexual assault case against former Stanford swimmer Brock Turner, the complaint said. Dauber has been leading an effort to recall Persky over his handling of the case.

A letter to Nicola Hanna, an interim U.S. attorney in California, named actor Mark Salling, who committed suicide amid a child pornography case, the complaint said.

A letter to Sabato referred to him using a Jewish racial slur and told the former actor he was going to hell, according to the complaint. Sabato is seeking the Republican nomination to run for the House seat in California's 26th Congressional District.

A Facebook page matching Frisiello's name and mentioned in the court documents is filled with news articles, several of which refer to the subjects discussed in the letters. For instance, as the complaint states, an ABC News story about the powder sent to Trump was shared on the page on Feb. 12 .

(This story has not been edited by NDTV staff and is auto-generated from a syndicated feed.)
Comments
Daniel FrisielloVanessa TrumpDonald Trump Jr