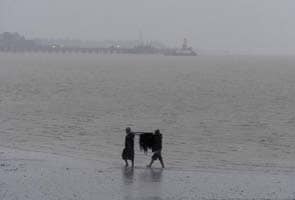 Sittwe, Myanmar: A cyclone threatening to lash low-lying coastal areas of Bangladesh and Myanmar appears to have weakened, but still poses a risk to more than eight million people, according to the UN.

Cyclone Mahasen is moving northeastwards over the Bay of Bengal and expected to make landfall on Friday morning north of the Bangladeshi city of Chittagong, sparing Myanmar's restive Rakhine state from its full fury, the UN said.

"The cyclone does appear to have weakened and it has been downgraded to a category 1 cyclone," the UN Office for the Coordination of Humanitarian Affairs (OCHA) said in a statement released late on Tuesday.

But it may still bring "life-threatening conditions" for 8.2 million people in northeast India, Bangladesh and Myanmar, it warned, adding Bangladesh's Chittagong and Cox's Bazaar areas could face the worst of a tidal surge and heavy rains.

Cox's Bazaar, a long strip of coastline, is home to ramshackle camps housing many of the estimated 300,000 Rohingya Muslim refugees living in Bangladesh.

Experts say Bangladesh is better prepared to handle cyclones than authorities across the border in Rakhine, where tens of thousands of Rohingya made homeless by communal unrest last year languish in flood-prone camps.

Myanmar state media late Tuesday said rescuers were searching for 58 missing Rohingya whose boat capsized after hitting rocks in a coastal waterway after they fled the cyclone's path to escape to higher ground.

A number of other Rohingya in Myanmar have expressed reluctance to relocate, reflecting deep mistrust of security forces following two outbreaks of violence last year that left about 200 people dead and whole neighbourhoods razed.

Rights groups have accused Myanmar security forces of complicity in the unrest.

OCHA said Myanmar planned to move at least 38,000 internally displaced persons out of the cyclone's track by Tuesday, but added that it was unclear how many had actually been relocated.

Promoted
Listen to the latest songs, only on JioSaavn.com
Myanmar's army has been mobilised to help evacuate those most at risk. But some rights campaigners said the effort had come too late after months of warnings of the danger posed to the camps by this year's monsoon.