Curiosity Rover's Five-Year Journey Across Mars In One Stunning Photo

Curiosity took its first photos from the dunes with its back to the wind, the Planetary Society wrote, and watched sand blow across the crater's floor. It would have to be careful going forward, lest its wheels get stuck. 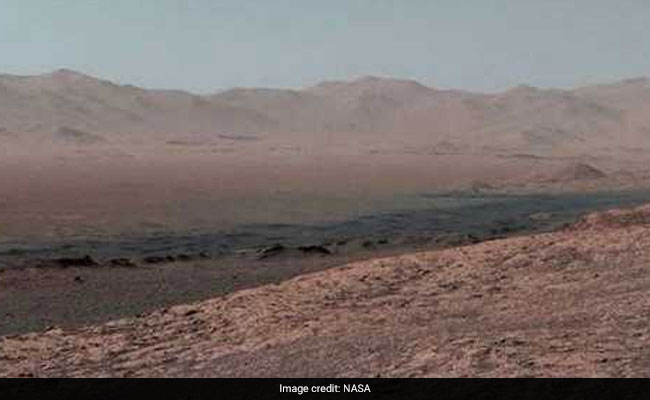 After 1,856 Martian days among blue sunsets, sand dunes and small, lumpy moons, the Mars rover Curiosity sat on the ridge of an ancient lake bed and looked back on its five-year-long journey so far.

NASA released a composite photo of what Curiosity saw in October this week, and if the rover could breathe, it might gasp.

In one image was its whole story: from the lower slopes of Mount Sharp, where it sat holding its camera, to the spot in the crater floor 11 miles distant, where it had touched down five years earlier to great celebration on Earth.

As the most complex NASA instrument ever put on Mars, with its drill, laser and chemistry set, Curiosity has sometimes disappointed those who would mine its data for research. A NASA panel even chastised the robot - or its operators - for doing more sightseeing than science.

Maybe for the same reason, Curiosity has brought Mars to life for the public. The soil data it's collected suggest Mars was once a beautiful planet of rivers and lakes. But the rover's many postcards of eclipses, dust devils and shimmering sands showed the world it's a beautiful place, even now.

From the ridge on which Curiosity sat late last year to take its panorama photos, it could see the treacherous Bagnold Dunes it had crossed months before.

The rover reached the dune field on the 1,174th Martian day, or sol, of its mission (late 2015 on Earth) and spent months navigating between them. These mounds of windblown sand stretched for miles and were one of the greatest barriers between Curiosity and its destination - Mount Sharp, toward the crater's interior.

Curiosity took its first photos from the dunes with its back to the wind, the Planetary Society wrote, and watched sand blow across the crater's floor. It would have to be careful going forward, lest its wheels get stuck.

Naturally, it made time for a few selfies on the way.

By the end of 2016, Curiosity had cleared the dunes and was rolling across veins of gypsum. Attending to its scientific duties, The Washington Post wrote, the rover used its laser to detect traces of boron in the rock, suggesting a habitable lake once covered the crater floor.

Then it turned toward Mount Sharp and began to climb its lower ridges, where it now sits.

But before leaving the lowlands behind, on sol 1,597, the rover captured stop-motion video of dust devils streaking across the plains of Gale Crater.

Before crossing the dunes, Curiosity spent months traversing the foothills beneath Mount Sharp. It reached the Pahrump Hills on sol 753 - in September 2014 - and by the end of the year had excited scientists with the first definitive evidence of organic matter on Mars, raising hope that life might once have swum in alien waters.

The hills weren't all easy going. The rover short-circuited while drilling at Telegraph Peak in early 2015, losing a few days for repairs.

A couple of months later, Curiosity recorded something that may not have much scientific value but amazed many on Earth: a sunset, tinted blue by the Red Planet's dust.

There are 668 sols in a Martian year, but Curiosity tends to mark its anniversaries in Earth time.

On Aug. 6, 2013 - one Earth year after the rover landed on Mars - NASA engineers programmed the rover to vibrate its soil analysis unit to the tune of "Happy Birthday."

A few weeks after this lonely celebration, as it rolled across the flatlands of Gale Crater, Curiosity looked straight up at the Martian sky and saw the moon Phobos, crossing the sun. This wasn't actually a rare sight; Mars has two small moons, and experiences a solar eclipse nearly every day, The Post wrote. But it was one of the memorable images of Curiosity's mission and helped cement the rover's reputation as a photographer on Earth.

Maybe realizing this, NASA celebrated Curiosity's second "birthday" in 2014 not with a song - but a black-and-white portrait of a tire track.

On sol 1, better known as touchdown day at NASA's mission control, the most sophisticated rover yet built floated from space to the surface of Mars on a rocket powered "sky crane."

Its landing site was visible in the panorama photo released this week - a speck of plain inside the northern rim of Gale Crater, named wistfully after the science fiction writer Ray Bradbury.

Scientists had great expectations for Curiosity, which cost NASA $2.5 billion and boasted its own mobile chemistry set. It was a machine designed to keep its face in the dirt.

But the rover began to defy expectations with its first scoop of soil in the fall of 2012. It spotted something shiny in the dirt and spent days studying it, only to find out it was a piece of its own plastic.

NASA scientists had hoped Curiosity would make it to the base of Mount Sharp by the end of the year, The Post wrote, but those plans were quickly shot. The rover spent more than a month wandering around its landing site before beginning its long journey.

Then it made its way toward the dunes, slowly, pausing again and again to take pictures or stare at eclipses or make art in the sand - a robot that knows getting there is half the fun.

(Except for the headline, this story has not been edited by NDTV staff and is published from a syndicated feed.)
Comments
Mars rover CuriosityNASA