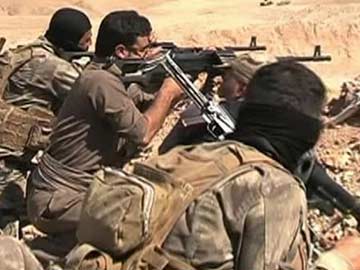 Baghdad: Iraq's government once battled entrenched Shiite militiamen but is now making common cause with them against a jihadist-led onslaught that Baghdad's forces are struggling to contain on their own.

Shiite militiamen are fighting alongside Iraq's flagging forces, bringing experience, morale and increased numbers to the government side, which has lost large areas of five provinces to the Sunni Arab militant offensive.

But even if it pushes back the offensive, the government may have traded that immediate threat for another it cannot control.

"The last time the militias became strong and Baghdad had to contend with them, it led to operation Charge of the Knights," said John Drake, a security analyst with AKE Group, referring to a 2008 operation against Shiite cleric Moqtada al-Sadr's Mahdi Army militia that only succeeded with American support.

"This involved heavy fighting in the south of the country," said Drake. "The difference now is that the government won't have the same US military support."

The Shiite militia resurgence also risks further alienating the Sunni Arab minority, which populates most areas overrun in the offensive and was targeted by death squads during a Sunni-Shiite sectarian war, which peaked in 2006-2007 and killed thousands.

"The reinvigoration of Shiite militia groups will, at the very least, be of concern for the Sunni community, given that such groups were involved in widespread sectarian killing," Drake said.

"It will likely make it harder for the government and international community to engage the Sunni community in meaningful dialogue and could polarise Iraqi society along sectarian lines even further."

Information on militiamen fighting alongside Iraqi forces is sketchy, and some officials, including Prime Minister Nuri al-Maliki's spokesman, Ali Mussawi, deny that they are doing so.

Asaib Ahl al-Haq, which broke away from the now officially inactive Mahdi Army, is pegged as one of the most active groups.

Its forces have fought alongside soldiers and police in Diyala province, northeast of the capital, and are also present in the Baghdad area, Iraqi officers say.

Funerals in the shrine city of Najaf for members of Asaib Ahl al-Haq and other groups, including Ketaeb Hezbollah, also point to Shiite militia involvement in the fighting.

Meanwhile, Sadr has announced the formation of C (Peace Brigades) to defend religious sites, a force that is to include former Mahdi Army fighters.

Hakim al-Zamili, a senior MP loyal to Sadr, said Saraya al-Salam forces are in Samarra and would protect religious sites in the city north of Baghdad in coordination with Iraqi security forces.

Militias in Iraq never truly went away, but they are now operating far more openly than they have in years.

Illustrating this, Sadr called earlier this month for a military parade in Sadr City, a north Baghdad area named after his father.

Rank upon rank of fighters filed past watching crowds, weapons ranging from Kalashnikov assault rifles and shotguns to rocket launchers shouldered as they marched.

Trucks mounted with tubes for firing artillery rockets drove ahead of the thousands of fighters on parade, some of whom chanted "Mahdi," the name of the revered 12th Shiite imam, as a marching cadence.

The fighters said they are not against any specific religious or ethnic group, and that their aim is to defend the country from the threat of the militant advance.

But it is unclear how well that sentiment would hold up in combat.

"We are the army of peace. We are one hand -- Sunnis and Shiites and Kurds, and we will not sell this country," said Ali al-Zayadi.

Another fighter said he sees no "difference between Sunni and Shiite, nor Kurd nor Christian."

But he and others also made clear where their first loyalty lies.

For people in Sadr City, the parade was a display of the forces ready to protect them from the militant onslaught.

"They come here to protect us, and we (are) with them and we support them," said Mustafa, an engineer.

Shopowner Abu Ahmed agreed, saying: "We are proud of them; these are our sons."

But others have had enough of the long years of violence in Iraq by non-state armed groups, whatever their religious affiliation.

Promoted
Listen to the latest songs, only on JioSaavn.com
Taha Obaid said in Baghdad's Saidiyah area that he hopes sectarian strife does not return.

Whether gunmen are Sunni or Shiite, Obaid said, they "are the same thing just the names are different."