"The crew members are saying that they were hit by a flying object. They saw it with their own eyes," Yutaka Katada, head of Kokuka Sangyo shipping company, told reporters. 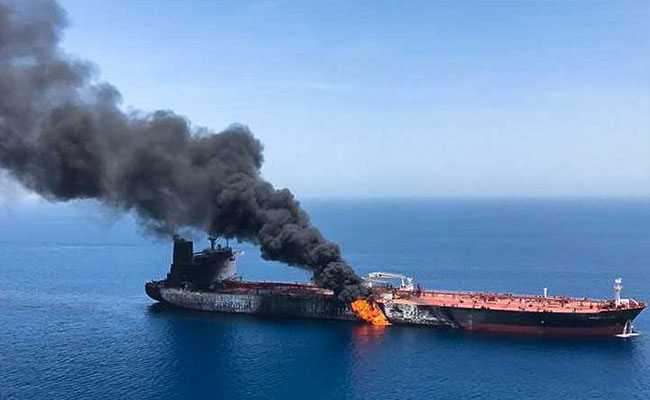 The Kokuka Courageous was hit around the same time as another tanker in the area.

The crew of a Japanese-owned tanker hit in an apparent attack in the Gulf of Oman saw a "flying object" before a second blast on board, the operator's head said Friday.

"The crew members are saying that they were hit by a flying object. They saw it with their own eyes," Yutaka Katada, head of Kokuka Sangyo shipping company, told reporters.

"We have received a report saying that something seems to have flew in, there was an explosion and it created a hole in the body of the ship," he added.

Katada on Thursday had told reporters that the Kokuka Courageous, which was loaded with methanol, had suffered two apparent attacks.

After the first, "our crew members made evasive manoeuvres but three hours later it was hit again," he said Thursday.

On Friday he said he did not yet have information about the nature of the first attack on the tanker.

The blasts caused a fire on board, but Katada said Friday there had not been major damage. The crew were evacuated, with one member suffering minor injuries.

"Crew members went back to the ship with support of the US military and recovered the backup power source," Katada said.

"We'll review the overall damage but we don't think there's a possibility it will sink. There's no damage to the goods and fuel."

He added that he believed initial reports suggesting a torpedo was involved in the attack were incorrect.

"The damage was above the sea surface. It would have been below water if it was a torpedo. So I think the report is inaccurate."

The Kokuka Courageous was hit around the same time as another tanker in the area, the Norwegian-owned Front Altair, which was hit by three explosions, according to the Norwegian Maritime Authority.

There has been no claim of responsibility for the blasts, with Iran denying US claims of Tehran's involvement.

(This story has not been edited by NDTV staff and is auto-generated from a syndicated feed.)
Comments
Gulf of OmanKokuka CourageousCompany head Yutaka Katada