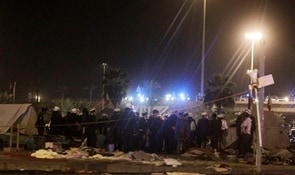 Manama, Bahrain: Without warning, hundreds of heavily armed riot police officers rushed into Pearl Square Manama early on Thursday, firing shotguns, tear gas and concussion grenades at the thousands of demonstrators who were sleeping there as part of a widening protest against the nation's absolute monarchy.

At least five people died, some of them reportedly killed in their sleep with scores of shotgun pellets to the face and chest, according to a witness and three doctors who received the dead and at least 200 wounded at a hospital here. The witness and the physicians spoke in return for anonymity for fear of official reprisals.

The abrupt crackdown on what had been a carnival-like protest injected a new anger into demonstrations calling on King Hamad bin Isa al-Khalifa to enact reforms. "Death to Khalifa, death to Khalifa," hundreds of protesters chanted on Thursday outside a hospital as women ran screaming through wards and corridors seeking lost children.

"They made the people feel safe," said a nurse, Fatima Ali, referring to what had initially seemed to be official tolerance of the huge protest in Pearl Square, emulating an uprising in Cairo's Tahrir Square that brought down President Hosni Mubarak. "Then they killed them."

The square was filled with the crack of tear gas canisters and the wail of ambulances rushing people to the hospital. Teams of plainclothes police officers carrying shotguns swarmed through the area.

In the hospital morgue, one body lay next to a tray with 200 shotgun pellets that had been dug from it. Doctors said paramedics who rushed to the square in ambulances after the convulsion of violence were beaten by police. Some of the people admitted to the hospital with injuries had been handcuffed with thick plastic restraints, made to lie down, then beaten, the doctors said. A witness, who spoke in return for anonymity, said he had seen two people shot dead as they slept.

Other injuries were caused by rubber bullets, batons and beatings.

"There was a fog of war," said Mohammed Ibrahim as he took refuge in a nearby gas station. He was barefoot, had lost his wallet and had marks on his leg where he said he had been beaten. "There were children, forgive them."

The unrest posed another diplomatic challenge to the United States as it struggles with how to respond to largely peaceful movements against entrenched rulers. Bahrain has long been a strategically important American ally, hosting the Navy's Fifth Fleet.

On Thursday, television images showed a long convoy of armored military vehicles rolling into position in Manama. News reports quoted a military spokesman as saying the deployment was to defend people and property.

The Interior Ministry said the army would take all necessary steps to ensure security and it urged people to avoid the center of Manama.

In Pearl Square, riot police officers backed by scores of SUVs with flashing blue lights could be seen on Thursday picking their way through the deserted remnants and debris of the protesters' tent camp.

Some of the clashes this week erupted as protesters buried two people killed earlier in the demonstrations and organizers said on Thursday that the funerals of the latest casualties would provide a test of whether the authorities' actions had cowed their opponents.

Only hours before Thursday's crackdown, the square had been transformed from a symbol of the nation -- anchored by a towering monument to its pearl-diving history -- into a symbol of the fight for democracy and social justice that has been rocking autocratic governments all across the Middle East. Tens of thousands of people had poured into the square during the day, setting up tents, giving rousing speeches and pressing their demands for a constitutional democracy.

By 11 p.m. Wednesday, the square had started to quiet down. Young men sat smoking water pipes, while young children slept on blankets or in tents. At 2:45 a.m. Thursday, the camp was quiet, those awake still reflecting on the remarkable events of the day. And then, police vehicles began to appear, encircling the square. At first there were four vehicles, then dozens and then hundreds.

"Everybody was sleeping, they came from upside and down," said Zeinab Ali, 22, as she and a group of women huddled, crying and angry, in small nearby market.

The protest had begun on Monday, when young organizers called for a "Day of Rage," modeled on the uprisings in Egypt or Tunisia. On that day, the police were unforgiving, refusing to allow demonstrators to gather, overwhelming them with tear gas and other rounds. One young man was killed, shot in the back by the police. A day later, another young man, a mourner, also was killed, shot in the back.

That galvanized the opposition and under pressure from the United States, the king withdrew his police force from the streets.

For a time, it appeared that change might be coming quickly to Bahrain, a tiny nation in the Persian Gulf ruled for more than 200 years by the Khalifa family. The royal family is Sunni while the majority of the nation's 600,000 citizens are Shiite.

The Shiite community has long complained of being marginalized and discriminated against.

On Wednesday, as the protesters gained momentum, Shiite opposition leaders issued assurances that they were not being influenced by Iran and were not interested in transforming the monarchy into a religious theocracy. Those charges are frequently leveled against them by Sunni leaders here.

Still, the leaders of the largest Shiite political party, Al Wefaq, announced that they would not return to Parliament until King Hamad bin Isa al-Khalifa agreed to transform the nation into a constitutional democracy with an elected government.

By evening, crowds spilled out of the square, tied up roads for as far as the eye could see and united in a celebration of empowerment unparalleled for the country's Shiites.

"They say you are few and you cannot make changes," said Ali Ahmed, 26, drawing cheers from the crowd as he spoke from a platform. "We say, 'We can, and we will.'"

"The people want the fall of the regime," the crowds chanted on the darkened square, their words echoing off the towering buildings nearby.

Late at night, thousands of people remained, hoping to establish a symbolically important base of protest in much the same way Egyptians took over Tahrir Square to launch their successful revolution against Hosni Mubarak.

But the leadership's newfound tolerance for dissent was a mirage.

Bahrain, while a small Persian Gulf state, has considerable strategic value to the United States as the base of its Fifth Fleet, which American officials rely upon to assure the continued flow of oil from the Persian Gulf to the West and to protect the interests of the United States in a 20-nation area that includes vital waterways like the Suez Canal and the Strait of Hormuz. The base is home to 2,300 military personnel, most of them in the Navy.

United States military officials said Wednesday they were taking no extra security precautions at the American base in Manama, which is not close to the protests, and that there had been no threat to United States forces in the region. "The US is not being targeted at all in any of these protests," an American military spokeswoman, Jennifer Stride, said in a telephone interview.

Bahrain has been a politically volatile nation for generations.

The Khalifa family has ruled since the 18th century and has long had tense relations with the Shiite majority. The king recruits foreigners to serve as police rather than trust Shiite citizens to wear uniforms and carry weapons.

In 2001, voters in Bahrain overwhelmingly approved a national charter to lead the way toward democratic changes. But a year later, the king imposed a Constitution by decree that Shiite leaders say has diluted the rights in the charter and blocked them from achieving a majority in the Parliament.

Before the events in Egypt and Tunisia, the traditional opposition made little progress in pushing its demands. But the success of those popular, peaceful uprisings inspired a change of tactics here, and young people led a call for a Bahraini "Day of Rage" on February 14.

By nightfall Wednesday at Pearl Square, a feeling of absolute celebration took hold, a block party in the square. If the afternoons belonged to disaffected young men, the evenings belonged to the whole community.

BBC Arabic was projected on the side of the pearl monument, making Pearl Square seem like a living room where protesters sat together, relaxed and watched TV while sipping tea. At least until the police arrived.

Promoted
Listen to the latest songs, only on JioSaavn.com
As the sun rose over the square, the night's events came into sharp focus. The entire field was trampled and crushed. Canvas tents and a speaker's podium lay crushed. The sound of ambulances continued to wail, and a helicopter circled the square.