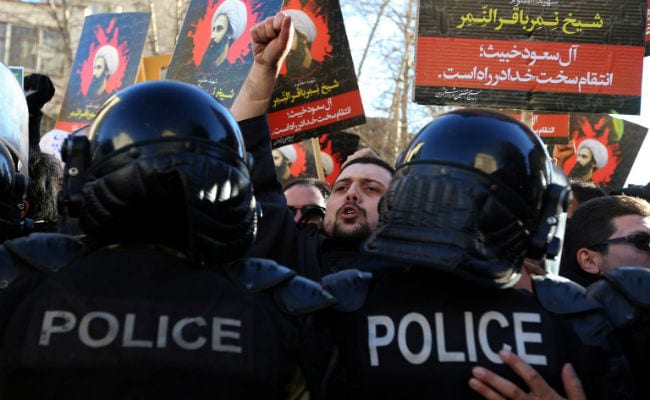 Iranian protesters hold portraits of prominent Shiite Muslim cleric Nimr al-Nimr as they confront riot police during a demonstration against his execution by Saudi authorities, on January 3, 2016, outside the Saudi embassy in Tehran. (AFP)

An interior ministry official said that several people, among them minors who took part in protests, had been arrested along with others who "misused social media", state-run BNA news agency reported.

Demonstrations erupted in Bahrain after Saturday's execution of Nimr al-Nimr, a driving force of protests in Saudi Arabia's east in 2011 who was among 47 people put to death in the Sunni-ruled kingdom.

Some injuries were reported.

Protesters carrying pictures of Nimr marched through several suburbs of Manama, among them Jidhafs, Sitra, Duraz and Bilad al-Qadeem.

Witnesses said the violence was worst at Sidra west of the city, with some 400 demonstrators clashing with police.

The same sources said security forces used tear gas against protesters in Duraz who blocked a road and hurled stones at police.

BNA said the "assistant undersecretary of legal affairs" at the interior ministry announced Sunday that "several rioters and vandals have been detained".

"A small number of people who misused social media for illegal purposes" were also detained, the official was quoted as saying.

It was not clear how many people were arrested or when.

The official said "the parents of several minors were also summoned" under legislation which stipulates they could be jailed or fined for "crime or delinquency" committed by their children, BNA said.

Authorities had said that they would take "all necessary legal measures" against any "negative" actions in response to the death sentences, which they would consider as "inciting sedition and threatening civil order".

They also warned of legal measures against anyone who used "social media networks to spread rumours that influence security".
Bahrain, home to the US Navy's Fifth Fleet, has been rocked by a Shiite-led uprising since February 2011, with demands ranging from a constitutional monarchy to overthrowing the ruling dynasty altogether.

Scores of opponents have been detained, with many facing trial, while others convicted of involvement in violence have been handed heavy sentences, including loss of citizenship and life in prison.