The Brazilian environment ministry said that the couple polluted the Queima Pe river, which is a primary water source for the nearby central-west town of Tangara da Serra. 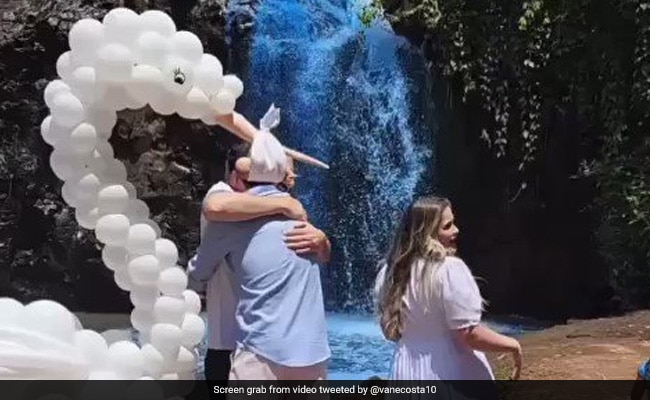 The gender reveal stunt was a violation of Brazil's federal environmental law.

A couple in Brazil is being investigated by the environmental ministry after reportedly contaminating a waterfall and river with blue dye in a gender reveal stunt. A video from the celebration posted on social media showed the waterfall looking an unnatural shade of blue, indicating the baby will be a boy. The clip sparked a lot of backlash on the internet and even prompted environmental officials in Brazil to investigate the incident.

Sharing the video on Twitter, one activist wrote, "Seriously, they thought it was a good idea to put dye in a waterfall?! So many ways to make a revelation tea and they managed to choose just one with an environmental impact."

According to The Independent, the incident took place last Sunday, September 25, in the state of Mato Grosso. The Brazilian environment ministry said that the unidentified couple polluted the Queima Pe river, which is a popular tourist destination and a primary water source for the nearby central-west town of Tangara da Serra.

In a statement, the  Environment of Mato Grosso (SEMA) said that the department will investigate the couple to determine what products were used to dye the waterfall and if there is any environmental damage.

Separately, as per Huff Post, the officials also stated that the gender reveal stunt was a violation of Brazil's federal environmental law. The couple has been charged with harming the environment, and now the ongoing probe will determine penalties and fees, the authorities added.

Meanwhile, gender reveal parties have often in the past been criticised for extreme stunts. Last year, a couple in the United States was charged with manslaughter after the smoke bomb they used at a gender reveal party sparked a massive wildfire. A gender reveal stunt off the coast of Mexico also ended in a tragedy as a plane announcing the baby's sex crashed into the sea, reportedly killed two people who were on board.