Cruise operators insist there is "no reason to believe" there are any cases of the deadly virus, which has killed over 1,100, on board and have urged Thai authorities to reverse their decision. 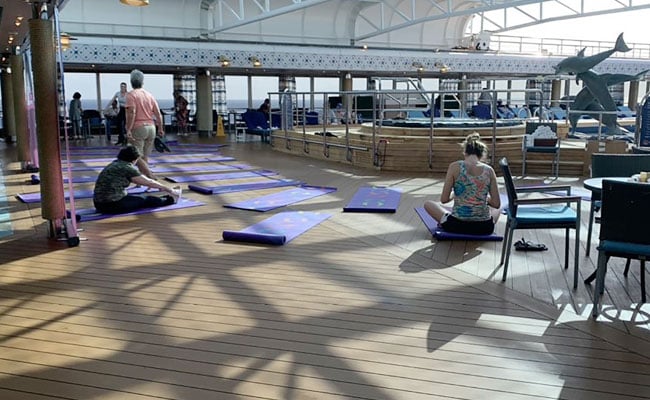 One of the passengers said that they are eating, drinking, exercising inside the cruise ship

On board a US cruise ship that is being rejected at Asian ports over coronavirus fears, stoic passengers are keeping spirits up with poolside yoga, spin classes, comedy shows and a few drinks.

The Westerdam, with its 1,455 passengers and 802 crew, left Hong Kong on February 1 on what was meant to be a dream 14-day cruise across Asia, and was due to disembark this Saturday in Yokohama, Japan.

But Japan, Guam, the Philippines, Taiwan and now Thailand have refused to allow the ship to dock.

Cruise operators insist there is "no reason to believe" there are any cases of the deadly virus, which has killed over 1,100, on board and have urged Thai authorities to reverse their decision.

Several other cruise ships have been refused entry at ports across the Asia-Pacific region- from Singapore to Tonga- as fears over the virus spike.

On Wednesday afternoon the Westerdam still appeared on its way to Thailand's eastern seaboard, where authorities have instead offered to ferry over supplies.

Even though their holiday plans in tatters, passengers are making the most of the extraordinary circumstances- some taking to social media to share amusing asides on life unwanted and at sea.

"Not a bad place to be captive. I'm in the salon having my hair done right now and getting ready to hit the buffet," Christina Kerby said on Twitter, where her photos of yoga or posts on morning spin classes have bounced around.

Speaking later to AFP she said "we're eating, drinking, exercising, swimming, going to comedy shows and listening to music onboard".

"There is no shortage of activities to keep us entertained."

A video shows passengers in a ballroom giving hearty applause to the crew- many of whom are from the Philippines and missed their chance to see family on the scrapped Manila stop.

The atmosphere is in stark contrast to the gloom encasing the Diamond Princess, a quarantined Japanese cruise ship riddled with the virus which has forced passengers into a depressing lockdown in cabins.

"We're all good. The mood is positive... there's no tension on aboard" said Lorraine Oliveira, from Ireland, on the ship with her husband and two children.

Before it was barred from docking, boat operator Holland American Line initially said the cruise will disembark on Thursday at Thailand's Laem Chabang port, a few hours east of Bangkok.

In neighbouring Cambodia, where Sihanoukville has a port able to accommodate cruise ships, authorities have also said they can not allow the ship to dock.

"But in an emergency we could allow them to stay in our waters awaiting for rescue from a country with enough expertise."

With no idea of where they will make land or when, passengers have cancelled onward flights, travel plans scrambled by events- and governments- beyond their control.

"No sickness on board. This is now a political situation, not a health one."

Health authorities in Tonga have refused entry to three cruise liners - CMV Astor, CMV Columbus and Crystal Serenity- due to dock in the Pacific island nation on Wednesday.

A fourth passenger ship Wind Spirit, which had been set to arrive on Saturday, was also told to stay away.

The diversion notice did not say where the ships were headed but online trackers suggested the Astor was steaming towards Auckland, Columbus and Serenity were Fiji-bound and Wind Spirit was still near Tahiti.

Meanwhile Cunard's Queen Mary 2 luxury liner, currently off the coast of Malaysia, has been diverted to Freemantle in Western Australia, cancelling stops in Singapore, Hong Kong and Shanghai.

(Except for the headline, this story has not been edited by NDTV staff and is published from a syndicated feed.)
Comments
Coronavirus threatUS cruise shipUS