Tianjin is home to China's largest domestic Omicron cluster to date, with almost 300 local cases reported since the highly transmissible variant was first discovered over a week ago. 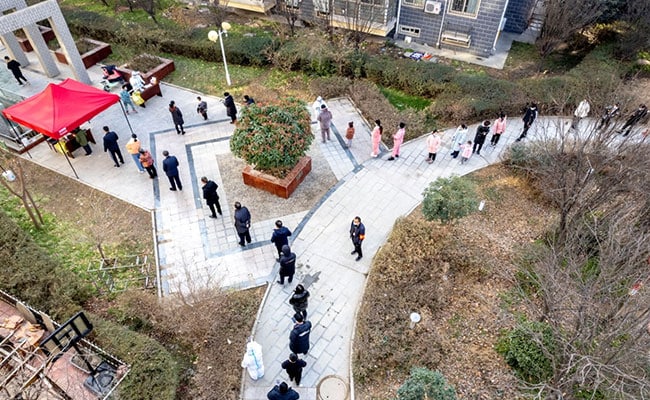 Here's a rundown of the measures in place in key areas of the world's most populous nation.

Tianjin is home to China's largest domestic Omicron cluster to date, with almost 300 local cases reported since the highly transmissible variant was first discovered over a week ago.

Officials have not yet identified the source of the outbreak, as the city completed a third round of mass testing on its 14 million residents last week.

Authorities have stopped short of ordering a complete lockdown of the city, an important industrial manufacturing and port hub. Last week, carmakers Toyota and Volkswagen shut down their factories in the city.

Affected districts have been locked down since last week, with locals unable to leave their homes. Residents cannot leave the city without official permission.

The Tianjin outbreak is noteworthy because of the city's proximity to Beijing just 150 kilometres (90 miles) away.

Authorities have stepped up controls over transport links to the capital, with trains cancelled and highway checkpoints installed.

The Tianjin outbreak has already spread to Anyang in Henan province and the coastal port of Dalian, Liaoning province.

Tensions are running high after the capital's first local transmission of the Omicron variant was reported on Saturday, just weeks before the Winter Olympics are due to start.

The city is now demanding a negative test before travel and a follow-up test after entering the city, with residents urged not to leave the city for the upcoming Lunar New Year holiday.

Some major tourist attractions have been closed, as authorities tested over 13,000 people working and living in the affected areas.
The capital has sealed off its Winter Olympics "closed loop", which will cocoon thousands of athletes and Games staff for weeks without direct physical access to the outside world.

Authorities reported nine new local cases in the province Monday, spread across the cities of Zhuhai, Shenzhen, Meizhou and Zhongshan.

The major tech hub of Shenzhen has logged a handful of cases of the Delta variant since last week, while it reported its first Omicron infection Sunday.

Authorities have linked both outbreaks to workers in the international supply chain, as delays have built up at the city's Yantian cargo port -- one of China's busiest.

The coastal city of Zhuhai, bordering the gambling hub Macau, has ordered mass testing for its residents and urged them not to leave the city unless necessary, since it first reported seven Omicron cases on Friday.

All tourist attractions were closed and long-distance bus and water transport routes suspended.

A handful of positive cases have also been discovered in the city of Zhongshan, near Shenzhen, since last week, leading to travel restrictions and the suspension of public transport.

Several cities in the central province of Henan -- which lies near Xi'an -- have strengthened virus controls in response to hundreds of new infections since late December.

The province reported 68 new local transmissions Monday, with 60 in the hotspot city of Anyang, seven in Xuchang and one in the provincial capital of Zhengzhou.

Zhengzhou has imposed a partial lockdown and ordered its nearly 13 million residents to get tested.

Meanwhile, the cities of Anyang and Yuzhou have been placed under lockdown, affecting around six million residents.

In Anyang, all commercial stores and takeout restaurants were ordered to close except to ensure the supply of daily living materials.

The historic city of 13 million people is in its fourth week of a strict lockdown as it races to contain a 2,000-case outbreak, one of the largest in China for months.

Residents may not leave their homes or travel out of the city, famed for its Terracotta Warriors.

Local authorities have come under fire for their handling of a lockdown that has included supply issues and medical tragedies.

Cases have slowed to single-digit figures in recent days.