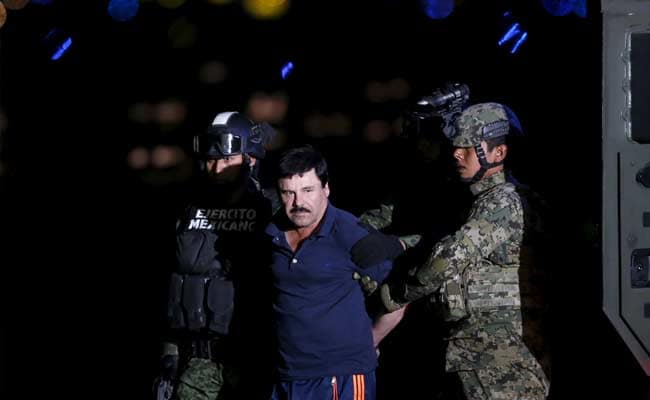 El Chapo was sentenced to life for trafficking hundreds of tons of narcotics into US. (File)

Convicted Mexican drug lord Joaquin "Chapo" Guzman has appealed against his life sentence handed down a year ago by a US court for trafficking hundreds of tons of narcotics into the country.

"El Chapo," as he is commonly known, is kept in isolation, incarcerated one of the United States' highest security prisons, located in Colorado's mountainous desert.

"Chapo Guzman's prosecution was marred by rampant excess and overreach, both governmental and judicial," his lawyer Marc Fernich wrote in the appeal, presented late Friday to the Second Circuit Court of Appeals in New York.

The 62-year-old former leader of Mexico's powerful Sinaloa drug cartel, was convicted last year of crimes spanning a quarter of a century, including trafficking hundreds of tons of cocaine, heroin, methamphetamines and marijuana.

A lawyer for Guzman, Mariel Colon Miro, told AFP the initial ruling should be annulled because one of the jurors told Vice News he and others found information about the case via the media and social networks during the trial, which is prohibited.

She added that the complete isolation imposed on Guzman since his extradition to the US in January 2017 prevented him from collaborating on his defense both before and after the trial.

"We are very optimistic that something positive will come of this," Miro said, adding she hoped a new trial would be held.

During Guzman's reign, his cartel's empire expanded across the globe, its tentacles stretching from the Americas to Europe and Asia.

He managed to break out of prison twice. The second time, in 2015, via a one-mile (1.5 kilometer) tunnel that opened in his cell's shower. He zoomed out by hopping on a modified motorcycle mounted on rails.

Mexican marines captured Guzman six months later in January 2016 and he was extradited to the United States a year later, ending his decades-long cat-and-mouse game with the authorities.