China is North Korea's most important economic and diplomatic backer, despite its anger at North Korea' repeated nuclear and missile tests, and its support for strong UN sanctions against the North. 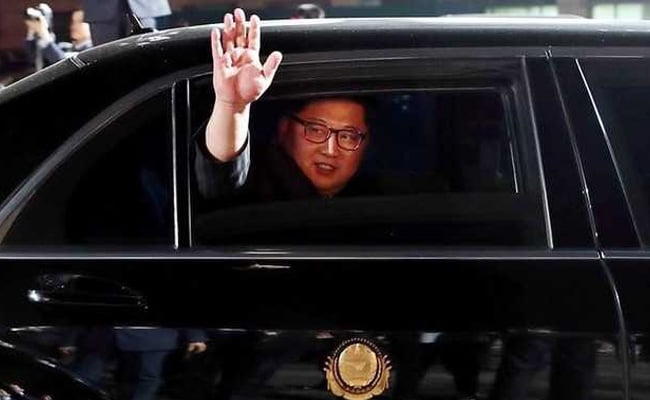 Kim Jong Un made the statement in a meeting with Chinese diplomat Wang Yi. (Reuters)

China is North Korea's most important economic and diplomatic backer, despite its anger at North Korea' repeated nuclear and missile tests, and its support for strong UN sanctions against the North.

However, China has also welcomed moves by North Korea to improve ties with South Korea and the United States.

The North surprised the world several days before the summit by declaring it would dismantle its nuclear test site to "transparently guarantee" its dramatic commitment to stop all nuclear and missile tests.

Meeting in the North Korean capital, Pyongyang, Kim told Wang that recent positive changes on the peninsula were beneficial to a peaceful resolution, China's foreign ministry said in a statement.

"Kim Jong Un said achieving the denuclearisation of the peninsula is the firm position of the North Korean side," the ministry said.

Wang told Kim that North Korea had seized the day and made a decisive decision, bringing positive changes.

Last week's summit talks between the leaders of the two Koreans had brought about an opportunity for a political resolution, Wang added.

China supported an end to the state of war on the peninsula, North Korea's shift to economic development and the resolution of North Korea's legitimate security concerns during the denuclearisation process, he said.

"China is willing to maintain communication with North Korea on this and increase coordination."

The 1950-53 Korean War, which technically is still going on because a peace treaty has yet to be signed.

In an earlier statement, he said China hoped dialogue between North Korea and the United States would be successful and that substantial progress would be made, referring to an upcoming meeting between Kim and US President Donald Trump.

"China is willing to strengthen communication with North Korea and continue to play a positive role in seeking a political solution to the Korean peninsula issue," Wang said.

South Korea's presidential official said high-level inter-Korean talks would be held in mid-May to work on implementing the agreement reached by Kim and Moon.

China had largely sat on the sidelines while the two Koreas improved ties, until Kim made a secretive trip to Beijing to meet Chinese President Xi Jinping in late March.

Beijing has been keen to show that it has an indispensable role to play in seeking a lasting solution, concerned that its interests may be ignored, especially as Pyongyang and Washington edge closer together.

The widely read Chinese state-run tabloid the Global Times said in an editorial any suggestion China was being marginalised "is a shallow attempt to manipulate public opinion".

Promoted
Listen to the latest songs, only on JioSaavn.com
China preferred quieter diplomacy, it said, pointing to the secrecy surrounding Kim's meeting with Xi.

"But Seoul, for its own political purposes, created much hype about the inter-Korean summit. US President Donald Trump has started claiming credit for the Kim-Trump summit before it even starts," it said.
© Thomson Reuters 2018