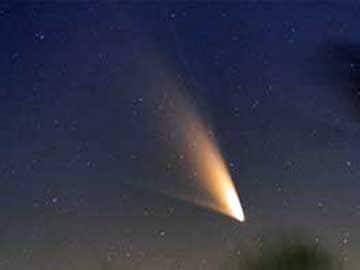 After a decade-long quest spanning six billion kilometres (3.75 billion miles), a European probe will come face to face Wednesday with a comet, one of the Solar System's enigmatic wanderers. (Representational Image)

Paris: After a decade-long quest spanning six billion kilometres (3.75 billion miles), a European probe will come face to face Wednesday with a comet, one of the Solar System's enigmatic wanderers.

The moment will mark a key phase of the most ambitious project ever undertaken by the European Space Agency (ESA) - a 1.3 billion euro ($1.76 billion) bid to get to know these timeless space rovers.

More than 400 million km from where it was launched in March 2004, the spacecraft Rosetta will finally meet up with its prey, Comet 67P/Churyumov-Gerasimenko.

To get there, Rosetta has had to make four flybys of Mars and Earth, using their gravitational force as a slingshot to build up speed, and then entering a 31-month hibernation as light from the distant Sun became too weak for its solar panels.

It was awakened in January.

After braking manoeuvres, the three-tonne craft should on Wednesday be about 100 km from the comet - a navigational feat that, if all goes well, will be followed by glittering scientific rewards.
"It's taken more than 10 years to get here," said Sylvain Lodiot, spacecraft operations manager.

"Now we have to learn how to dock with the comet, and stay with it for the months ahead."

Blazing across the sky as they loop around the Sun, comets have long been considered portents of wonderful or terrible events - the birth and death of kings, bountiful harvests or famines, floods or earthquakes.

Astrophysicists, though, see them rather differently.

Comets, they believe, are clusters of the oldest dust and ice in the Solar System - the rubble left from the formation of the planets 4.6 billion years ago.

These so-called dirty snowballs could be the key to understanding how the planets coalesced after the Sun flared into life, say some. Indeed, one theory - the "pan-spermia" hypothesis - is that comets, by bombarding the fledgling Earth, helped kickstart life here by bringing water and organic molecules.

Until now, though, explorations of comets have been rare and mainly entailed flybys by probes on unrelated missions snatching pictures from thousands of kilometres away.

Exceptions were the US probe Stardust, which brought home dust snatched from a comet's wake, while Europe's Giotto ventured to within 200 km of a comet's surface.

On November 11, the plan is for Rosetta to inch to within a few kilometres of the comet to send down a 100-kilogramme (220-pound) refrigerator-sized robot laboratory, Philae.

Anchored to the surface, Philae will carry out experiments in cometary chemistry and texture for up to six months. After the lander expires, Rosetta will accompany "C-G" as it passes around the Sun and heads out towards the orbit of Jupiter.

Before November's landing, though, Rosetta's operators have a mountain of work to do.

The first few weeks will be a get-to-know-you exercise, as the spacecraft gingerly carries out elongated loops around the comet, scanning its surface.

The probe will have to avoid ice crystals and dust particles that are stripped from the comet's outer layers as it nears the Sun - a trail that is reflected in solar rays as its wake.

And it will have to look for a suitable landing site for Philae.

Last month, as Rosetta came ever closer to the comet, its cameras revealed that the target body, far from being shaped like a potato as many had expected, rather resembled a duck - two lobes, one big and the other small, connected by a "neck".

"That was a bit of a surprise," said Philippe Lamy of the Astrophysics Laboratory of Marseille, southern France.

"Several theories have already been aired to explain this shape, but the likeliest in my book is that it came from two bodies which fused while the Solar System was being formed."

Promoted
Listen to the latest songs, only on JioSaavn.com
The unexpected shape will limit the choice of a landing site, Lamy said. "You can reasonably argue that it will impose additional constraints."